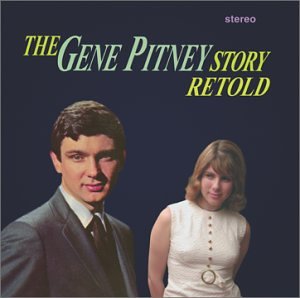 From the day I heard my dad’s 45 of “The Man Who Shot Liberty Valance/ “Take it Like a Man” on a Fisher-Price record player when I was in single digits, I immediately liked Gene Pitney.  The liner notes also revealed that instant attraction was also the reaction of several of the musicians gathered on this tribute. Maybe his ability to simultaneously whirlpool boldness with an authentic fragility is the reason his voice and enduring records can pull you in at any age.  To M’Lou Music has followed the lead and spirit of eggBERT Records and their solid “Melody Fair: Bee Gees Tribute” and “Sing Hollies in Reverse” releases and have rounded-up a collection of like-minded contemporary pop musicians who merge care for their craft with a deep respect for a vital and transitional musician. The dichotomies of Pitney’s lyrics and universal nature of his songs come through loud and clear on almost every one of these interpretations.  I totally overlooked the so-true line of “I Die a Little Bit to be in Love” until of heard Randell Kirsch & Billy Cowsill’s version of “It Hurts to be in Love.”  Also behind the cool front cover, standouts are rendered by the Now People, the Retros, the See Saw, It’s My Party and Lynchpin who sound like Barry McGuire-lite plugged into the better moments of Warner-era R.E.M. (The only glaring omission from the line-up is not including Outrageous Cherry’s remarkable cover of “Lips are Redder on You.”)  This tribute is a triumphant testament of the musicians’ ability to funnel Pitney’s contradictory sentiments embedded in his verse, chorus, lines, words and range into their own sounds and appeal like Gene Pitney himself-to so many ages and on so many levels.