United Space League: Mission 66 and Beyond 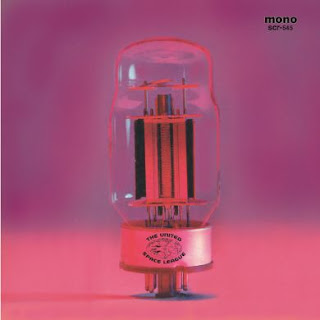 Prestage
August is always the cruel(l)est month in the low desert of Arizona, when one is spurred from car AC to building AC by a nasty humidity that imposes itself over the default heat. It quickly makes one start Coastal California Dreaming where even the parking lot of the Oxnard Costco takes on a magical and mythical aura with its sparkling 74 degrees of warm sun and cool breezes. I try to tell myself that August is equivalent to February in the dirty snow Midwest and a countdown to the autumnal equinox offers artificial solace. Frequently, the Bell Notes’ famous declaration of “I’ve Had It” comes to mind--wishing the 114 degrees summer days would speed up as I reach into a toaster-oven mailbox engulfed with utility bills and stuffed with wasteful redplum.com flyers. A few blazing desert days ago, I spotted a yellow maize envelope underneath the daily detritus--signaling something I actually wanted. My mind reeled to do a quick recent ordering inventory: Was this the new Surfites disc on Double Crown Records? Or perhaps the always welcomed appearances of one of the last standing print zines like Ugly Things or The Continental. Seeing the return address declaring Royal Oak, MI in bold and black Sharpie strokes, I knew it was the latest from Sound Camera Records. The weight of the heat, humidity and workday lifted as I unfolded to reveal the lost art and hope of the 45 rpm record.

Side B-LiftoffGoing right to the flip “Water Under the Bridge” makes one wonder if Freddy Fortune is getting topical or has just rediscovered his Barry McGuire and Chambers Brothers records. Immediately, a galvanized “we’re not messing around” sound (similar to the final Fortune & Maltese single featuring members of the Gore Gore Girls, the Hentchmen and Jonny Chan himself) shoots through the circuits without losing any of the unmistakable character and continuity that stretches back ‘round the bend to “No Stone Unturned.” (Is a song titled “Don’t Burn Your Bridges” loaded up next in the canon?) Fortune acts as the town crier as he urgently proclaims the necessary overdue changes in the headline chorus between verses detailing the realities of the existing order and the continuous strife.

Eve of Destruction>Dawn of Correction>Ball of Confusion?Could all this be taken as an implicit treaty on the grand American scheme? Fortune confronts “the dread, the grief” of the fallout due to “Too Many People” pushing angles and agendas and destroying things in the name of progress while human dignity is being ransacked under the ruse of security. The question of overall collective direction takes precedence as we discern if we are scraping bottom or even worse apathetically letting another year repeat itself under a President, who in theory, has given the people the most hope since JFK, but in execution might end up closer to James Earl Carter-possibly due to the insurmountable mess leftover from the previous “full-greed-ahead” regime. On an individual level, how do we react to things seemingly beyond our control or even more counteract the unceasing and insidious forces that in Fortune’ direct words “are not good”? The ultimate concern can be conjectured as a lopsided sphere (without Sky Saxon) not simply spinning out-of-control, but directly headed to an Altamount-like end and Soylent Green beginning on a grand scale. All this weighty matter is packed and delivered with the urgency of We the People punched up with the toughness of the Woolies and the Uniques and snapped together with an underlying mid-sixties pop sensibility that make Fortune’s records so enduring and lasting when also-rans have long stalled out. A magnificent and stinging fuzz worthy of Davie Allan opens up a vista to a possible turning point. In the end, there are no easy answers, no easy solutions and most of all no retreat.

Side A-Tang Not IncludedThe top side original “You Told Me a Lie” written by Ryan Dawson, showcases their sneer, snot and snarl-- rendering them acolytes, but not mere reflections of Mirror-era Chesterfield King (the Stop album in particular). As a given, these songs are muffled by myspace where the clunky characteristic of the website and overwhelming flatness overwhelms songs. In other words, get the real thing complete with the “Hojo blue” deadstock labels if you want to hear the dynamic mono blast off and not two songs sounding sourced from a C-60 Kmart tape.

Out of this WorldIn writing this, I realized that it has been almost 20 years that I have been listening to the music of Freddy Fortune. His various musical slants and phases have all been marked by an unswerving devotion to the lost and found possibilities of the mid-sixties. I first recall his guest appearance at show by the Knaves at the Small Planet in East Lansing 1991 where he joined them on stage for “Little Black Egg” while outside mohican punks gathered in the plaza probably bemoaning not being old enough to see Black Flag or Flux of Pink Indians. Witnessing Fortune & Maltese and the Phabulous Pallbearers in their prime at Detroit’s Gold Dollar preparing for their 1998 European tour is likely the closest to 1966 I will get. Another time they caught me by total surprise when they covered “There’s a Storm Coming” by the Standells under a starkly incongruent band shell in a perennially overcast Sterling Heights, (MI) Metro Park. It’s hard to believe it has been over a decade since the Four-Gone Conclusions stirred up an international frenzy and caused a big bang with their big beat at the Las Vegas Grind II. Supposedly this is Fortune’s last band, however like faraway stars yet to be discovered, we could only be scratching the surface. With the United Space League, it’s time to explore these new sounds emerge and converge with the configurations of light and shape of things to come.
Posted by Ted at 8:39 AM No comments: