Western Plaza-Case of the Missing Guitarist 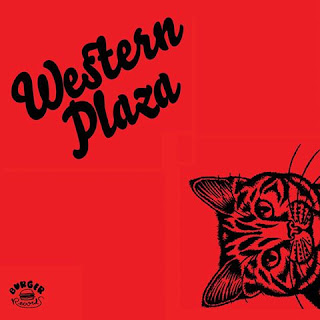 Being misleadingly described as “Party Garage Pop” in some quarters leads one to anticipate them slanting towards a deliberately shoddy and offhand sound that is all the rage with the cassette kids. Meanwhile, the band’s name conjures up everything from what used to be a telegram company (Western Union) to glowing “Stop & Shop” romantic notions evoked by the Modern Lovers in their declaration of “Roadrunner.” On another level, the band’s moniker reminds one of being young, with junior high friends and drinking Dr. Pepper in a strip mall at sunny noon without any acknowledged demands, responsibilities or expectations—even if all a mirage and never actual experience. Fittingly, “Thrift Store Girl” was chosen to be their first SoundCloud single. Vacuous, formulaic and shopworn were the initial "Apples to Apples" words when approaching a song entitled "Thrift Store Girl” in a power-pop, punk-pop or even a K Records context. Even when I was single, thrift tours or one-off detours took more gas and time than it was really worth, regardless of finding Sunshine Company long players for a buck or a Hawaiian-styled shirt with Century 21 logos emblazoned all over it. Still eternally swayed by the Ramones and Jonathan Richman, who both refined music and lyrics down to an enduring and elegant minimalism just when it needed it, gave me the impetus to proceed. Holding out hope against triteness, SoundCloud’s arrow revealed the sound of something significant sounding, quixotic and imbued with perfect pop sensibilities. The poetry-in-motion lyrics of an idealized girl and queen of cast-off treasure cascaded over an infectious song of all what life can be with or without all the entanglements and fault lines.


New Wave Vernacular
With the band not taking the now standard Bandcamp route, some digital back roads needed to be explored. Amarillo’s Panhandle PBS featured some some high production footage of the band in their “Yellow City Sound” studio and provided the much needed visual. Their stampeding and taunt "Tornado Dream" presented a "wiry" guitarist gliding across the sound stage with a Yuna Kim-like focus, while looking like one of the students in “Dead Poets Society" in a snappy Western shirt. "Tornado Dream" revealed an alloyed band with the guitars clashing, converging and intertwined like Big Country or Chisel while the overall song is a catchy as a 20/20 single. This small sampling revealed something was happening here in the musicianship, lyrics and overall sound that was more than a sum of the parts.

Backtracking
Next, I tried to connect the geographic dots, while subscribing to the isolation theory of bands developing distinctive sounds away from the Lite-Bright cities. Amarillo, Texas was not some a place that I thought about on a yearly basis beyond knowing that it was somewhere out in the Country of Texas west of Austin, Houston, Dallas or San Antone. Wikipedia revealed Terry “Suspicion" Strafford and Jimmy "Sugar Shack" Gilmer were from Amarillo, while Buddy Holly's Lubbock is 120 miles to the south.  A sidetrack to the the Light in the Attic Records website reminded me that the Kitchen Cinq were kicking around Amarillo before connecting with Lee Hazlewood and recording an outstanding album in Los Angeles overflowing in reverb.  I then followed the map and saw that Amarillo was affixed to Route 66 and clasped in with old Southwestern favorites like Albuquerque and Flagstaff. 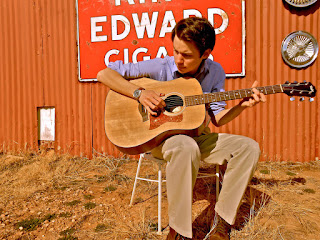 Case of the Missing Guitarist
Later, I watched a YouTube video of the band playing live in Austin at Weinermania 2015 as part of SXSW, but the supporting guitars behind talented lead singer Michael Blackwell took on overt and unsubtle ex-metalhead tinge. I learned that the missing undercurrent of sound was the aforementioned slight country gentleman Hayden Pedigo, an acclaimed and accomplished guitarist on his own right. This Texas Monthly featured musician makes records that take an entirely different direction from Western Plaza, but are mightily impressive even if I'm not one in position to assess John Fahey-inspired American Primitive work. The sound of his debut "Seven Years Late" record is evocative of the lunar land between names on a Texas road map and could have been used on the “Boyhood” soundtrack--if the film continued through all of Mason’s college years. In Paste Magazine, Hayden states he admires the multi-leveled production work of Phil Spector and Brian Wilson and would like to take Western Plaza in that direction. The impressive arrangement of Western Plaza's “When It’s Over” already leans that way in the how it turns, shifts tiers and expands out in such a pleasing way.


For the Record
Western Plaza has a head turning "where did that come from" sound despite being seemingly isolated in the ol' Republic of Texas. An expanded perspective reveals their distinctive regionalism while being connected to overall continuity of Route 66. Their debut album (somewhere between an EP and a LP) presents of an emerging band who have forged their own present pop sound while being in alignment with the long, glorious and always running American line led by Chuck Berry, the Beach Boys and late-'70s Power Pop. Along the way, they tunnel into the stomp 'n' snarl of 1966 Five Americans garage rock and span out to swirling psych pop of Strawberry Alarm Clock before arriving at the station of Hoodoo Gurus. Western Plaza is an apt name of a rock & roll band on the Southwest horizon who have a sound that is placing them on the map.