My Two/Three Sons
When I found out about a 1968 record from a band named Tinsel Mecca with a W. Tulsa St. Chandler address listed on its Toad Records label, I initially thought it was a social end product of a hippie house, not a 45 from the humble ranch of a former ex-major of Chandler (1976-1979).  Like the band’s evocative name, this elusive record and group took on a tinge of mystique and mystery when absolutely no information surfaced on the internet.  After reading through Jean Reynolds’ Chandler Mayor Stories interview with Ken Thomas, I surmised that possibly a few of his sons would have been teenagers in the ‘60s and possibly into music based on the family history that stated Ken Thomas’ mother was a contralto.  The same Jean Reynolds acted as a bridge to connect me with the two musical brothers behind the shrouded sounds.

On the Arizona Air
Keith mentioned with pride that the record was placed into rotation on Phoenix/Glendale's KRUX-AM by "Good Guy" DJ Al McCoy who went on to become the voice of the Phoenix Suns of the NBA.  “One time another student and I were returning back to Chandler from Northern Arizona University in Flagstaff and we heard KRUX play the Tinsel Mecca record on the car radio,” recalled Keith.  Keith (Chandler High class of ’65) said he was busy with school up in Flagstaff during this time and the record was actually recorded at the famous Audio Recorders in Phoenix on one of the university intersessions.  He deferred to his younger brother Rick (Chandler High class of ’68) for more information on what was going on musically in Chandler at the time.  At first, Rick seemed embarrassed about the band’s name as it could be construed to be taken as insensitive to the current political climate in the world. “I still don’t recall how we came up with the name of the group as we were headed into the studio and quickly needed a name,” said Rick. “The song, “Life’s in Vain,” in particular reflects when one is 19-20 years old, with limited life perspective resulting from living only for one’s self and without notions of the grander picture.” 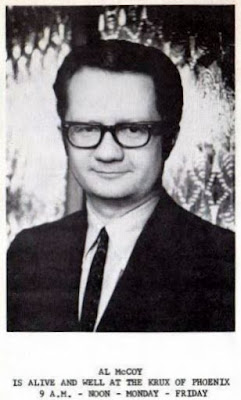 There’s a Place
Still there was a war raging on and growing disillusionment with the direction of the country was going. It was also an accelerated decade where each year contained a decade worth of changes starting around 1963.  Like countless others, Rick quickly became enamored with the Beatles. “It all pretty much started with the Beatles.  Sure there was Elvis, but the Beatles were the real deal because of their writing legacy and they influenced the world and still do,” reflected Rick.  “They directly inspired me because my background is of a writer when it comes to music.”  With all the seismic shifts, it was truly a charged time because no one knew how it was going to turn out.

The Toads Emerge from the Mire
Fittingly, for an incipient band known as the Toads they forged their sound in one of the area’s rare murky basements (an anomaly due to the local rock-hard soil) and on the outskirts of town. “The Toads practiced in a basement in Higley at one of the band member’s house at the time. His name was Danny Slocum. We'd also practice at Bobby Ryan's family ranch by Ryan Rd. & Arizona Ave.”  While they are still spoken with a sense of reverence by locals, Rick adamantly downplays any notions of being local legends. “The Toads never made a record or played anywhere but the Williams Air Force Base and the old gym at the high school,” laughed Rick. In fact, it was in the Chandler High old gym, that the Toads participated in the 1967 Arizona State Battle of the Bands, in which the Dull Brights (comprised of the three Walker Brothers and Armando Cordova) placed second in the state. “Growing up, we played ball with the Walker Brothers,” remembered Rick.  “They were from the Gila River Indian Community.” 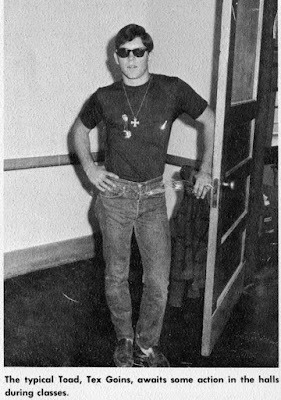 Towards Tensel Mecca
Rick was effusive when speaking of his brother Keith’s musical contributions. “We could pull off a cover of the Associations’ “Six Man Band” because we could do the harmonies and my brother Keith’s extensive singing experience and operatic training,” explained Rick. “He started taking voice lesson from an ASU professor when he was in junior high. He was in All-State choir throughout his years at Chandler High. He went on to major in music at NAU and sang one of the leads in a campus production of Madame Butterfly.”  However, when asked about his own musical background, Rick was succinct on his formative years: “I actually took lessons from Randy Garvin (Chandler High class of ’66) who was one of the best guitar players in town during the ‘60s, but other than that I was pretty much self-taught.”
From Audio Recorders to the Capitol Tower
Tinsel Mecca’s “Life’s in Vain b/w “Things That Do Exist” was recorded at the legendary Audio Recorders in Phoenix and released in late 1968 on Toad Records (#777), but supposedly did not include any Toads beyond the two Thomas brothers. As the ‘70s approached, the band was comprised of Rick Thomas, the aforementioned Randy Garvin and Keith Thomas and operated under the CSN&Y-like moniker of Thomas, Garvin & Thomas.  Rick was able to clear up some of confusion regarding band names and recording line-ups.  “The recordings we did were always with Thomas, Garvin, & Thomas, even when we used the names like Fencepost or  Tinsel Mecca on the Toad Record Label, clarified Rick. “Our first record together as Thomas, Garvin & Thomas was “Someday” (later “Love's Day”) in 1969. Sadly, the engineer didn't have the right levels and messed up the sound,” added Rick. “Audio Recorders was a nice facility, but we got a sound engineer who didn't know what he was doing.” 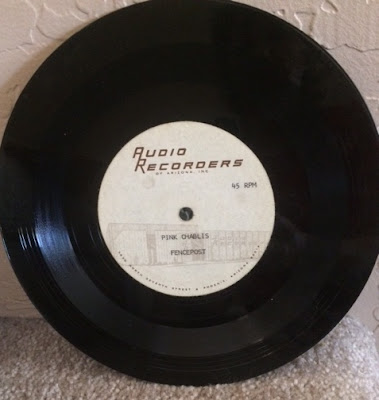 “When I told him the recording sounded distorted he said it was because of our bad amps. We were just kids, what did we know? When I went to California to try and push the record, someone at Capitol Records told me that the sound levels were all wrong and had nothing to do with us.”

Brother Records
The group later re-recorded on “Love’s Day” as the B-side of “I’m With You Jesus” on their own Brother Records imprint and featuring a W. Butler St, Chandler address. This time they were happy with the results. “I'm With You Jesus/Love's Day" had the backing of the ASU Jazz Band and ironically was recorded at a studio in Tucson, which would be hard to duplicate even today,” said Rick.  With Keith’s lead vocals “Love’s Day” naturally unfolds with its pull of undercurrent verses giving way to the sweep of the chorus waves.  The depth, layers and accomplished musicianship can be best heard on the 45 pressing.  This gem is reminiscent of the later New Colony Six and “Here, There and Everywhere” if composed and sung by George Harrison. 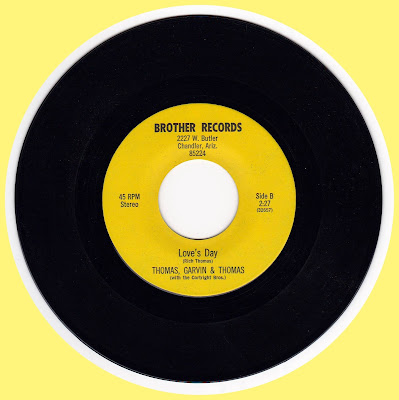 Musical Crossroads
In 1978, Thomas, Garvin & Thomas were based out of Seattle and the group committed to a gospel music direction which they continue to this day. “I went on to graduate from Arizona State University and then studied at a small bible college in Seattle where TG &T played in church, and then got my masters at NAU. Garvin also graduated from ASU as an art major. Some of the good musicians that I remember around Chandler were John Clapper, Tommy West, Steve Brown and the Cortwright Brothers who worked with us on the session of “I'm With You Jesus”/”Love’s Day.”  For the past 25 years, Rick has been instrumental in the lives of students in the Phoenix school districts as a music teacher.
Shifting Sands of Time
This Chandler music history seems so elusive and vanishing as we sweep by the half-century mark. While the pieces are now closer together and patterns have emerged, sometimes the sought answers are not answers.  After all, it’s about appreciation in hearing the previously unheard sounds, encountering differing perspectives and keeping a sense of enigmatic mystery intact.

Acknowledgements: Jean Reynolds for aligning the stars, John P. Dixon who initially made me aware of the Tinsel Mecca record and provided the label information,  Keith Thomas for his recollections and connecting me to brother Rick.  Rick Thomas for sharing his memories and music, Lita Jo Thomas for all the photos and hand delivering a “I’m With You Jesus”/“Love’s Day” single.  Nate Meyers, Curator of Collections for the Chandler Museum, for the yearbook scans.