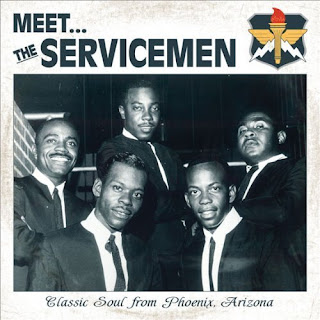 Like sand slipping through the fingers, this one at first can be hard to grasp, but ultimately revealing an extraordinary sound and story when one considers the powerful forces converging and layering over time. So what exactly do we have here? The facts, revealed in the liner notes by journalist Dan Nowicki, are scarce and we can only surmise at the background history which originally brought this smooth four-part R’n’B vocal group together at Luke Air Force Base in the scraggly desert-floor hinterlands outside of Phoenix during the ’66 & ’67 Vietnam War era. Moreover, the extant recordings reveal sounds which stylistically feel as if 10 years dropped out between the session dates of 1967 and the elaborate ‘50-ish vocal group harmonies which surface to the air. Nowicki relays that Hadley Murrell, a radio personality for KRIZ, was approached by group leader Jim Mitchell during a 1966 military dance. Mitchell furnished DJ Murrell a revelatory demo that had the Servicemen singing out their hearts-frequently in doo wop harmony like they were from a "back East" paved over with asphalt and surrounded by floor-to-ceiling echo-enhancing tile. However, this is not your garden variety doo wop group (sounds I also enjoy) who made the common jump from the high school hallways & street corners to the recording studios whose sounds have been endlessly reissued in the digital age by Collectables Records, but a group who musically bridged the 50’s and the 60’s with the entanglements of ‘Nam looming right over them.

Murrell, who also produced singles and long players by the Sect/Bliss and the Caravelles, was instantly impressed with the demo and quickly booked them and produced their sessions at Audio Recorders in Phoenix-first put on the musical map by Duane Eddy and Lee Hazlewood. The resultant songs and even the song titles will throw you for a loop. With a title “Are you Angry” one assumes this is going to be a smoldering song of desperation and confliction, but what transpires is a first single which bound outs of out of the speakers with a ska-like skip and girl- group backing not weighted down by the weight of the world-let alone the onus of war. Immediately following is an a cappella version of “Are you Angry” which highlights the sweeping 360 degree vocal interplay swirling around Jim Mitchell’s smooth lead at the epicenter. The flip “I Need a Helping Hand” retains the sweet ska horns swerving across punchy percussion and vibrant vibes while Mitchell dashes out lyrics which could be a theme for all of us. An a capella version “I Need a Helping Hand” flawlessly follows.

The track configuration of the a capella demo versions tagging the single versions works like a continuous hand-off of a baton around the curve of a track. I’m glad these demos were simply not appended to the end of the disc as bonus tracks. Instead of being possible afterthoughts, the pairings flow in unison and emanate their overall solidarity. Another standout is “I’ll Stop Loving You” which was issued as their 3rd single and aligned them closer to the Temptations and Four Tops than doo wop’s golden era of the previous decade. Their covers of the Five Keys and the “5” Royales finish off the disc in a fine way and had me recalling the weekly glories of the "Old 'n' Gold" rare oldies show on the former WDTR-then (late ‘90s) operated by the Detroit Public Schools. Lastly, the packaging is top rank and so lavish that I thought it was a Japanese release when I first pulled it out of the mailing package.

In a way, the Servicemen were courageously ahead of their time because vocal group harmony had most folks headed towards the exits in ‘66 and ’67 and the doo wop/50’s revival didn’t get going until 1969. The story of the Servicemen is remarkable that they could create such expansive urban sounds in the incongruous desert conditions bridging two decades of musical styles against the narrowing horizons imposed by Vietnam War. Then again, maybe this is the personification and manifestation of soul.
Posted by Ted at 9:19 AM No comments: 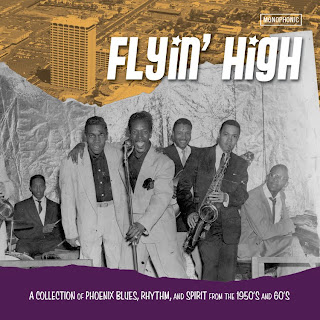 This new decade has seen me get lean in the direction of ‘60s R’n‘B while still embracing the folk-rock, surf, pop, garage, and psych sounds of the ‘60s. (I have probably been influenced by the book Sonic Boom reviewed below and revisiting the sounds of the Pacific Northwest.) This complilation disc featuring Phoenix blues, rhythm and spirit from the ‘50’s and 60’ mirrors my recent inclinations along with my long-time enthusiasm for regional history. With its Phoenix Suns’ colors of purple & orange and skycopter aerial photo of ‘60s era Phoenix (which is still more horizontal than vertical in its man-made nature), the top-notch graphic design resembles something that could have been released by Ace Records. Comprised of mostly masters, the sound quality is Grade A. Some favorites include “Oh Johnny” by Baby Jean which has the potential to be one of those perfect records to cover by the Detroit Cobras along with the blazing instrumentals “Flyin’ High Pts.1 & 2” by Jimmy Knight & Knights of Rhythm. Hopefully, there will be future compilations documenting the Phoenix scene of the ‘50s and 60’s that can join the vital place along side of Flyin’ High and Legion City-the CD which unveiled the glories of the mid-'60s garage scene in Phoenix, Arizona from the vaults of Viv Records a decade ago.
Posted by Ted at 9:11 AM No comments: 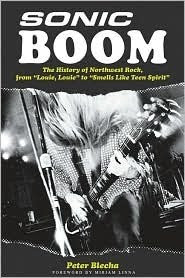 While the Pacific Northwest exploded as one three major musical regions along the Pacfic Coast during the 1960's, little has been rounded up in book form beyond scattered, but essential liner notes, print 'zines, websites, forum postings and Arcadia Press photo collections. After years of research and interviews, Peter Blecha has written what could be called the definite history of Seattle region music during the '50's & '60's. That being said Peter Blecha (or Backbeat Books) should have put the Sonics, with perhaps a small of inset of Pat O' Day, on the front cover. However, I realize they need to sell the book in 2010 and beyond--hence the Mudhoney photo. I didn't realize the huge impact (some say stranglehold) that Pat O'Day had on Pacific Northwest Rock 'n' Roll in the '60's. Also, amazing that he reappeared during the punk/power pop/new wave movement of the late '70's. The chapters about O'Day's rival Boyd Grafmyer and his merry hippies comes to a riveting twist as the Seattle '60s screeched to a halt. Blecha is generally on target with his assessment of the NW sounds, but I have to disagree with him that the Ventures' "Guitar Freakout and "Super Psychedelics" are sheer dreck and the worst of all their 250 albums. Their psychedelic exploitation experiments sound a lot better than their incongruous forays into disco. I also cannot share Blecha's enthusiasm for 90's major label grunge rock (e.g., Pearl Jam, Alice in Chains, Soundgarden) that made the city world famous for something beyond coffee, computers and salmon. While I would have liked more recognition of the Fastbacks and Kurt Bloch, I have to give Blecha credit for his coverage of the K scene. Finally, it was refreshing not having to read about Jimi Hendrix once again-except for his earliest Seattle days when he was spurned by local musicians for playing solos all the way through songs.
Posted by Ted at 8:03 AM No comments: