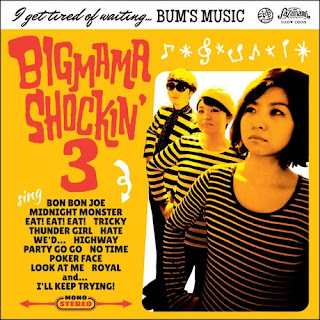 Before the internet explosion, finding these Japanese releases were elusive searches like seeking rare shortwave signals bouncing off the earth's upper atmosphere in the middle of the night. While the treasure hunt with its magnetic poles of frustration and reward now mostly dropped from the process, listening and exploring the music itself can now take the lead.

With an album title that seems to be directly transferred off some night market t-shirt and an even wackier band name, their sound falls somewhere between The 5.6.7.8's and the Shonen Knife to cite some comparable Japanese trios with the widest name recognition here in North America. However, this Sendai band is on a wavelength that is closer to the rock 'n' roll frequencies of  THE PORTUGAL JAPAN, Supersnazz. KO and the Knockouts and why don't we throw in the Muffs while we are at it. I could see this being a SFTRI release, if the prolific record label was still in full operation and reviewed in Shredding Paper. It's refreshing to hear their straight ahead approach that is characterized by big hooks, serrated Voxx guitars, propulsive drumming (with the drummer on lead vocals- Karen Carpenter style) and berets.

"Midnight Monster" would've probably been the band's first video and slotted last (1:55 am) if 120 Minutes was still around.  "Hate" actually skips along with a ska sound like "My Boy Lollipop" by Millie Small, and it's not until the kiss-off chorus that the folded up playground note reveals the h word before quickly doing an about face with a mention of love. With its sweet succinctness, the dashing "Highway" sounds like something from Momoko Yoshino's Sunnychar or Tiger Shovel Nose, while "Poker Face" delivers seemingly effortless roller coaster melodies over prominent girl-group backing vocals.  With their rhythm section motoring along like a dependable Honda engine, they pack more melodies in one song than many bands in their entire discography.

Starting with a "Black is Black" bass line copped from Los Bravos, "Look at Me" reveals their mod influence (early Who and Small Faces) they wear on the sleeves of their bar-stripe tees. This album features only one cover and they make the most of it covering the Zombies' "I'll Keep Trying" complete with a murky and whirling organ.  It should be interesting if they further explore this beat-pop direction as it could take them on a flight to international renown like Mama Guitar or the Pebbles. Regardless of future approaches, their debut transmits that unique Japanese knack for tapping into the essential elements of rock 'n' roll and making it all that more exciting.
Posted by Ted at 7:24 AM No comments: