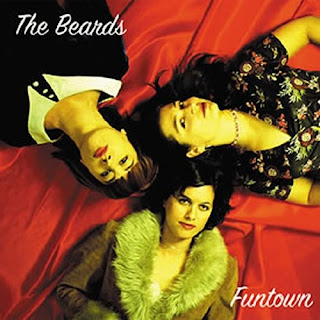 OK, add the Muffs to cub and Blondie, divide by the Beat and then compound to the power of Buck. Ah forget the formulas because it’s summer and it all arrives out of speakers fitting together like sparkling grocery carts or something.  “Make it in America” should be considered the anthem of this summer if there were a “Funtown” where officially-licensed Beards beach towels and colored-billed visors are sold next to the Panama Jack stuff and a radio station that plays “I Wanna Call in Sick Today” by the Excessories.  I would love to hear “Make it in America” really making it and blasting out of ’76-motif GE transistor radios, shower radios and bike radios all over this land. “Sidewalks” takes a break from the sun and is cool daydream believer pop for air-conditioned weekend afternoons.  Oh yeah…if you buy the real thing you will be greeted and treated by 11 videos.  Unlike most side projects, the band went all out for this release and the download excuse simply does not hold sway anymore.  I think my favorite video is for their cover of Frank Black’s “Thalassocracy.”   It’s all moving footage of the congested freeways of auto-centric Los Angeles. Makes me feel like I’m there stuck in traffic and I only want to hear classical on KUSC-FM for some reason.  Well, I don’t live in Los Angeles (any longer), so the already classic “Funtown” has been parked and playing in the car and home stereo all Arizona summer long.