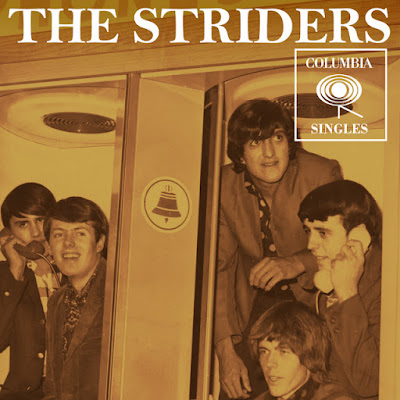 While the Spiders, fronted by a teenage cross country runner named Vince Furnier (later Alice Cooper), crept about Phoenix during the mid-sixties, over in Albuquerque, the Striders swiftly sprung from the Duke City to the City of Angels. Being managed by promoter, producer, musician and wunderkind Lindy Blaskey certainly fast tracked the group’s rapid rise from University of New Mexico students to recording artists for Columbia Records. Their particular California Cinderella story resulted in three singles issued in the still resonating years of 1966 & 1967.  Their recorded repertoire was certainty intriguing as half of their songs were previously first done by more recognized acts.  It’s almost as if Columbia Records was trying to get additional mileage from material like “Sorrow” (McCoys, Merseys) “There’s A Storm Coming” (an enduring Dirty Water album cut by the Standells) and “When You Walk into the Room” (written by Jackie DeShannon and most associated with the Searchers).  Adjoining these covers, are a couple of songs written by the aforementioned Lindy Blaskey. "Am I on Your Mind" falls short in its emulation of the Troggs, Dave Clark Five, and Paul Reveve & the Raiders with its lack of punch, while “Say that You Love Me” is a pleasant mid-tempo number somewhere between the sweep of the Beau Brummels and the fragility of the Nightcrawlers. The Striders went out on a strong note as their last single was arguably their finest two minutes.  Despite the potentially misleading MC5-ish title of “Do it Now,” it sounds like early folk-rock Turtles with vocal harmonies galore elevating the cavalier "time to move on" lyrics. Numerous personnel changes and the seismic late '60s shift towards heaviness probably contributed to the demise of a group that has yet to be properly documented.  Overall, it's another unanticipated set of restored recorded remnants of the California pop dream from a determined group and manager from the perennially overlooked city of Albuquerque.