The "Shifting" Winds: Taking the Nation by Storm 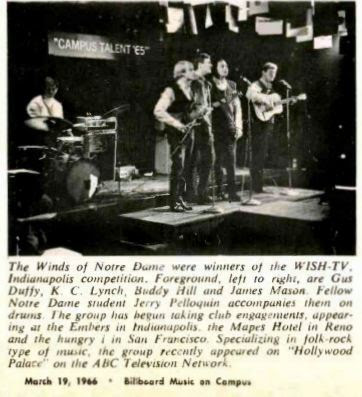 The Winds (1961-1965) were the folk forerunners to Webster's New Word (1965-1967) who went on to work along the adventurous frontiers of early folk-rock in New York City.  Their experience ranged from playing turkey festivals in Turlock, CA to hobnobbing with giants like Frank Sinatra. They could easily hold their own on show biz big stages like the Hollywood Palace extravaganza that was nationally televised by ABC Television on April 3, 1965, while also crossing paths and sharing stages with some of the folk era's most influential underground musicians. Many of these folkniks would later form the vanguard of the electro-folk sound.

Bringing It All Back Home
The original inspiration of the Winds started on the Pacific Coast before coming to fruition in the crossroads of America. "The first time I ever saw Buddy (Hill) was in San Francisco," recalls KC Lynch.  "It was 1960, and my father saw in the paper that the Notre Dame Glee Club was coming to town to do a concert. We went, and Buddy did three or four solos (“negro spirituals” as they were then called).  I walked out of there astounded by the beauty and power of his voice, and with a strange feeling that we would somehow meet.  I went to sea that summer as a merchant officer on the China run.  When I got to South Bend that fall I met Mike Kealy.  Although we had never known each other, we both came from the Bay Area and both of us had played in typical Kingston Trio type bands at our high schools.  My girlfriend had dumped me while I was at sea, and Mike set me up on a blind date with the Saint Mary's student who years later became my wife and the mother of my two wonderful daughters.  Mike and I started a folk duo, and soon went looking for that voice I had heard in San Francisco.  We found him, and that was the beginning of the band."

Down in Bermuda and up in the Bend
Buddy was born in Warwick, Bermuda  Previous to Notre Dame, Buddy studied at the prestigious Boston Latin School  "Buddy was more British gentleman than anything," offers future Webster's New Word bandmate Jerry Peloquin. "His voice was so powerful.  He was a tenor of course and standing next to him in full voice was like being next to the Chicago Bears offensive line on game day." The band later went on tour Bermuda in 1964 including a show at the legendary Forty Thieves Club in Hamilton.  An early iteration of the Winds featured Jim Higgins on upright bass and Rich Leuke on banjo, who was a man before (or after) his time.  Rich had a penchant for wearing an "Amish" beard, openly identified himself as a Socialist and shunned contraptions with combustion engines. (Rich was replaced by John Bill, and later by Gus Duffy.) In contrast, the dapper lead singer Mike Kealy embodied the genuine Big Man on Campus persona that held sway at the time. "You have to remember that Father Hesburgh's aspirations at that time were to make Notre Dame the Harvard of the Midwest," adds Lynch.

Vestibule Folk
In 1961, the harmony-rich group made their first recording in the form of a self-taped a cappella version of  "Shenandoah." The group utilized the natural echo present in the vestibule of Notre Dame's south dining hall.  The sea shanty "Haul on the Bowline," featured Gus Duffy on lead vocals was recorded at the hungry i in San Francisco complete with the sounds of the Clancy Brothers drinking in the back.  At the time, the Clancy Brothers were a major influence in folk music "Liam, Paddy and Tom Clancy were friends of the family and I myself come from the Irish/Celtic musical tradition that believes a song should tell a story or evoke a feeling." The traditional spiritual "We are Crossing Jordan River" incorporated the frailing banjo style of Rich Leuke.  Rich was said to be pioneering banjo player at Notre Dame in the '60s folk era.

The Best is Yet to Come
Besides two of members hailing from the San Francisco Bay area, extensive summer touring allowed the Winds to establish a strong presence in the West.  In summer of 1963, the Winds were the house band in the Celebrity Room at the Cal-Neva Lodge owned by Frank Sinatra that actually straddled the two state lines. "Sinatra was actually kind of like a mentor to me," fondly recalls Lynch. "I met him in the kitchen where I found out that he had been watching us, loved our act, and had been responsible for tables full of noisy drunks suddenly disappearing from the audience.  Lounges pay well but they full of loud and inattentive people, and not at all the concert atmosphere we were used to. When I was seriously injured in a rockfall climbing accident, Frank visited me in the hospital in Reno and sent occasional notes to cheer me up. In 1964, when I was going through long months of recovery Frank would occasionally call me up in San Francisco and say 'Chum, you’ve got to promise me you’ll go back to school and get your degree.  I wish to hell I had gotten mine.'  He was a nice man, and a thoughtful one."

Pacific Coast Old School & Midwestern Fields of Opportunities
The group not only demonstrated their adaptability by playing a vast array of venues, but also straddled two different eras in the music industry and competing factions in the restless folk scene. "We had had one foot in the campus folk scene and one in the urban folk scene," explains Lynch.  "We would play a super club, change our clothes and then hit the downtown folk clubs. Norton Wais and his wife Nadine were our managers in San Francisco. Nort had been the partner of Abe Saperstein in the Harlem Globetrotters franchise. They were old school but wonderful people who soon had us booked all over the country. Our second paying gig was in a night club with Count Basie and Mel Torme. We were regulars at the famous SF folk clubs, like Enrico Banducci’s hungry i and The Purple Onion." The group was also featured in one of Ralph Gleason's columns in the San Francisco Chronicle. In late 1964, Fantasy Records released “Whisper to the Mountain” which was written and sung by Mike Kealy.  Their debut single received radio airplay and did especially well in the Bay Area. "The Ox Driver Song" appeared on the flipside.  This stirring American traditional was  also recorded by Odetta, the Seekers and Pete Seeger.  The Winds' version showcased the strong lead vocal of Buddy Hill.  Fantasy launched their satirical doo-wop-ish and now highly sought  second single "Radiation Baby" in spring of 1965. 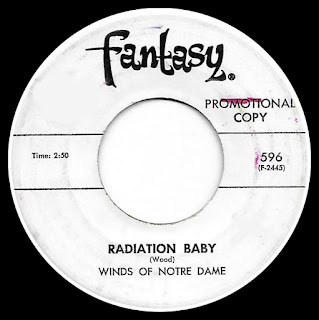 The Winds/The Four Winds/Winds of Notre Dame/Winds from Notre Dame
The old school management did everything to put the quartet in position to succeed.  "The addition of Notre Dame (i.e,, The Winds of Notre Dame)  was not something we did ourselves, states Lynch. "It was placed on us by management simply because of the name recognition and drawing power. Norton also got us on the Midwestern state fair circuit in summer 1964 complete with sponsorship from the Pioneer Seed Corn Company. Gus Duffy will tell you about the groundbreaking jingle he wrote for them and we performed on stage."  The group also established a foothold in Chicago and opened for Nina Simone at the historic Palmer House hotel.

"You Can't Seem to Find How You Got There"
The Winds felt some of the early tremors in seismic shift from folk to folk-rock in 1965.  In their experience, the new vibrations came in the form of an amalgamation of sound and electricity without a descriptor at the time from a group from New York.  "Enrico booked the Lovin’ Spoonful to follow us and the Clancy Brothers (who influenced everybody) at the hungry i. “Do You Believe in Magic?” was climbing the charts fast, and I remember watching them set up and rehearse on the tiny stage, remembers Lynch.  "It was the first time we-or the hungry i for that matter - had ever seen amplifiers or wires. (They were scrambling to find AC outlets in the old brick walls behind the curtains.)  That was our first live exposure to what would become the Village Sound, and we liked what we heard."

The New Vanguard
Directly feeling these new currents, the Winds flowed into new directions and they proceeded to go into the previously unexplored realms of amplified folk & roll. It was in San Francisco during the summer of 1965 that we went electric and changed our name from the Winds to Webster's New Word, offers Lynch.  "Our influences shifted from the Gateway Singers, the Limeliters and the Four Freshmen to Dylan and the Byrds. We also had the close relationship with the early Jefferson Airplane at that time."

Start Spreading the News
An unforeseen chain of events occurred that would help propel the group from the fairs, fields and stages of the heartland to the major label big time of New York City.  Their talent was spotted by the Corinthian Broadcasting Corp. who had television stations in Houston; Tulsa, Sacramento, Fort Wayne, and Indianapolis (WISH Channel 8).  For their "Campus Talent '65" program Corinthian auditioned more than 1,000 performers at 102 colleges and universities, with the winning acts appearing on prime time local television specials in the aforementioned five regional markets.  Playing under their representative name, the Winds of Notre Dame, they won the Indianapolis event on WISH Channel 8, and joined leading lights like Eloise Laws who had captured the local Houston crown for a national showcase at the New York discotheque, Arthur in December 1965. More than 700 advertisers and agency representatives and even Andy Warhol were said to be in audience. The Winds got the ultimate big break as the legendary John Hammond of Columbia Records was in attendance that night with an offer in mind.  The group found themselves in the middle of a major label bidding war, but sided with their initial suitor Columbia Records in the end.  This was only the beginning of Webster's New Word's adventures in New York City and beyond.  Some of the sights, sounds and stories from that vibrant era can be found here. 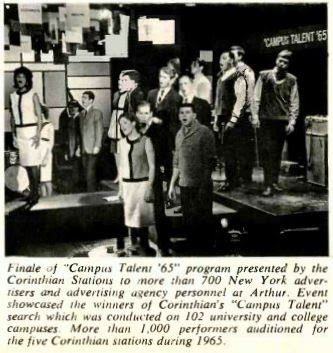 The Eternal Presence
"Over the years the band went through multiple names, music styles, banjo players, drummers, bass players, lawyers, record labels. managers, home cities, girlfriends, wives, and every other thing that most other bands of that era went through," summarizes Lynch.  "Players came and went, and some tried to come back.  But not Buddy.  He was always there: the only one besides me who was there from the very beginning to the very end."
Bridging the Divides
The Winds were versatile in that they could rub shoulders with the show biz jet set, while also sharing stages with self-marginalized artists and truly talented musicians who were all mixed together in the rumble tumble tail-end of the beatnik scene and the pastoral campus folk revival. In a span of four years (1961-1965), they skillfully proceeded between the commercial common ground, academic responsibilities, the mountain ranges of the West and the subterranean spaces of the urban folk scene-while unknowingly building the future foundation for Webster's New Word. Crossing the country and vast cultural spheres in 1965, they quickly incorporated the Byrds' ringing convergence of Dylan and the Beatles and fully developed their harmonious folk-pop-rock sound as Webster's New Word.  Lastly, as an integrated touring group they directly encountered threatening intolerance all while maintaining musical credibility in the stratified urban folk scene and performing as consummate professionals in the prime time.  They accomplished all of this in a transitional era where the overarching currency of the day was some elusive notion of the authenticity which shifted like wild mercury or should it be said the Winds.