Travel in the Rainbow: An Interview with Kiyo Ogami of the Fabchicks 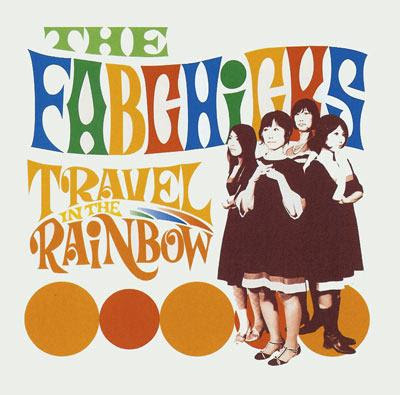 The Fabchicks were one of the most distinct Japanese “Girls with Guitars'' groups of this century.  In sensibility and sound, they rate up with the Pebbles and Mama Guitar when it comes to all-female ‘60s inspired garage-pop-beat bands. If they had recorded more and their releases were not so obscure, they could have had the international acclaim achieved by the aforementioned bands. Still, if a Japanese band wished for American recognition and releases on U.S. labels like Get Hip, Norton, Estrus, Dionysus, Spinout, Sub Pop or SFTRI, they had to tour the entire country like Shonen Knife or the coasts like the Neatbeats from Osaka or Supersnazz and Jackie & the Cedrics from Tokyo.  Being included in a Tarantino movie like the 5.6.7.8's also does not hurt. The Fabchicks had an impeccable and strong sense of style and also well defined and refined tastes in music. Most of all, they had some of the sunniest harmonies rising from the other side of the Pacific Ocean. Their sole release Travel in the Rainbow is so extremely rare that I could not even find it at the epicenter for all things Japanese garage-Time Bomb Records in the Fabchicks’ home city of Osaka. Finding out more about the Fabchicks had been on my wish list for some time. Guitarist and vocalist Kiyo Ogami was the prime mover behind the band. She recently took the time to fill us in on her past music experiences, current endeavors and possible future explorations.
And away we go! Growing up, tell us about your early musical experiences.  I believe you studied piano as a youngster?

As a child, I studied electric organ for 7 years. When did you start getting into ‘60s sounds?

When I was a little girl, I used to play songs by the Beatles and the Carpenters on the electric organ. Playing these songs gave me a fondness for the hits, but I also listened to a lot of oldies. After that, I started listening to '60s garage punk music in earnest after I started playing the electric guitar in a college club.
When did you decide you wanted to form a band?
I think I was about 25 years old.  The first band I joined after my college graduation was a '70s punk style girl band. The leader of the band was into punk music, but I liked garage punk along with '70s punk, but due to little differences in musical tastes, I left the band and formed a '60s style girl band.
How did the Fabchicks form?

I scouted the drummer when she was playing in my friend's band. Except for the drummer, we met through a seeking band members flyer. 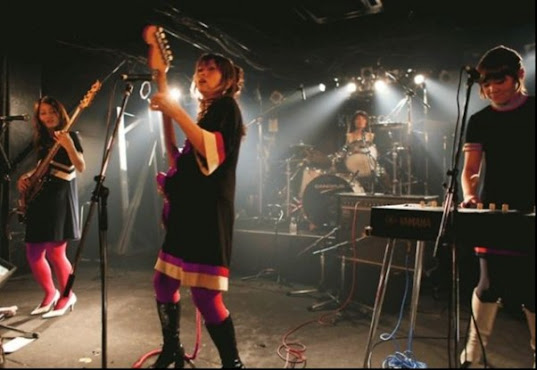 Where did the Fabchicks practice?  I imagine bands in Osaka have to rent out rehearsal rooms/practice space?

Yes, almost all bands in Osaka have to rent out rehearsal rooms. We used to practice there after work once a week.

Which type of electric guitar did you play for the Fabchicks?
My main guitar was a vintage Fender Mustang ‘68, looks cool, doesn't it? 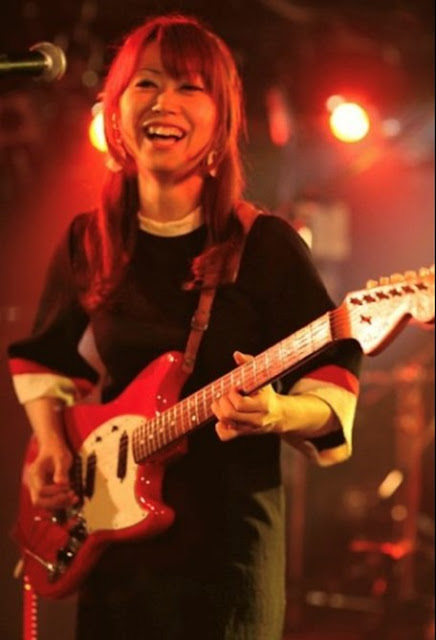 Who designed the wonderful and colorful Fabchicks' logo? It was designed by the label owner’s friend, who worked as a professional designer

On Youtube, I recall there was an in-the-studio Fabchicks video from maybe a television show, but it is no longer there. Is this my imagination or was there once something really up like this on Youtube? Thank you for remembering the video, even though I'd forgotten it myself. Maybe it was released as a promotion video for CD sales, but I don’t know where it is now...sorry.
Your originals “Singing Bird” and “On the Rainy Day” are standouts in that they strike a wonderful balance between the now and then with hopefulness shining through.  Would you provide any background or context on these charming Fabchicks songs?
I wanted to make evergreen girl group songs like the ones in Sequel Records' "Here Comes the Girls" compilation series. Our songs were inspired by many less-famous girl group sounds. Travel in the Rainbow features “Treat Me Like a Lady”- an uptown pop song most associated with Lesley Gore.  There is also a frantic rendition of “Heart” which was composed by Petula Clark, Tony Hatch and Georges Aber that was also covered by the Remains and 2 of Clubs.  Yes, “Treat Me Like a Lady” was also covered by the Tages ('60s Swedish beat band). The Tages continue to impress me! What were some of the other covers performed by the Fabchicks? We also played ”Da Doo Ron Ron" / the Crystals,  “Captain of your Ship" / the Paper Dolls, “Taxman" / the Beatles, “The Train / 1910 Fruitgum Company” “Mickey" / Twinkle, “I Want You to Be My Baby / Billie Davis etc. In the later years of the Fabchicks, we also played Showa Kayo (Japanese '60’s, '70s songs) like “Yasashii Akuma" / the Candies, “Koi No Sharock /Mie Nakao etc. 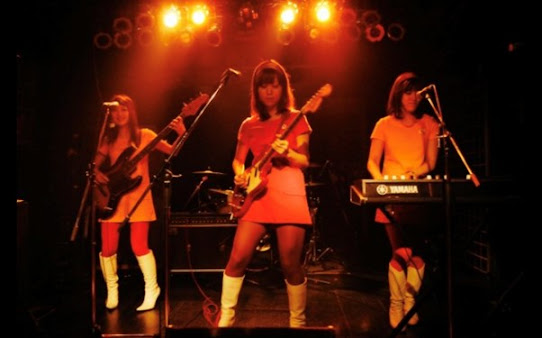 I recall the Fabchicks opened for the Woggles. Which other memorable bands did the Fabchicks share stages with? We opened for the Pebbles in Kobe, I so respect them. Also, I played at an event where the Collectors (Japanese mod band) were the main act, which is also a precious memory. Do you know if the record label, Hammerkin' Production, would ever consider putting Travel in the Rainbow on Bandcamp and/or Spotify? Hmm, I don't know as that label is no longer around.
I noticed you have been playing acoustically in the last few years. It appears like you have had a good experience playing a wide variety of venues in the Kansai region.  By the way, the dashing version of Blondie’s “Heart of Glass” is really cool. Which venue (with all the interior wood framing) were your performing at?
That must be Unshudo. I played as the opening act for Sally Seltman (female singer-songwriter from Australia) a few years ago at Unshudo. The venue is small, but very atmospheric. Many musicians in Osaka love that space. In 2020, you revisited “On a Rainy Day” in which you re-recorded the song on acoustic guitar with subtle jazz embellishments. Are you moving towards jazz and jazz chords or is this all part of your repertoire? Since I started practicing acoustic guitar, I've been learning some jazz chords.
“Paisley Morning” features some elaborate fretwork on the acoustic guitar.  Sounds like you have been putting in plenty of practice time on the guitar. Now that my kids are a little older, I've started playing guitar every night. Now I'm taking a little break because I'm busy with work. You are most known for leading the Fabchicks, but you have extensive experiences with several other groups.  Would you like to elaborate on your involvement with any of these bands? The Spree (Guitar) the Cleabs (Drums) the Boogies (Drums) Woman Jacket, the NGI Girls (Vocals). The Spree is the aforementioned '70s punk band. I was in the band as lead guitarist. In the Cleabs, I started playing drums as a support drummer. They played '60s psych/garage punk/freakbeat-inspired original songs. I'm also currently playing drums in a band called the Boogies. I recall the Boogies is a ‘70s rock power trio and the Cleabs had the leadoff song on the Hammerkin' A Go! Go! compilation.  The NGI Girls is your trio that has the look and sound of the Supremes and the Three Degrees. How did the NGI Girls come about?  It appears like this trio is very well received by audiences! When my little girl was only two years old, I asked my friends I met at a parent-child gospel circle to help me form the NGI Girls. I've always wanted to sing in a Motown style girl group that sings without instruments.
Are any of the other former Fabchicks members still involved with music that you know of? The other members still have small children and are busy raising them, so they are not active in music at the moment. Where do you see your music going in the future? When the Corona disaster is over, I want to revive my guitar playing and the NGI Girls activities again! And I want to write songs like Susanna Hoffs, which are based on many shared influences. What are some concepts that you have learned from being in a band that you are able to apply to work and/or life? That's a bit tough question…being unshakable, maybe.
Favorite current Japanese bands and/or musicians?

After I started playing the acoustic guitar, I’ve been mainly listening to acoustic guitarists' music like Yuichi Ohata, Mari Nakamura, etc. They are great guitar players.

What are some Japanese records, from any era, that you would recommend?  I know you have previously expressed how the Pebbles were a major influence for the Fabchicksl   Actually, I don't listen to much Japanese indie music nowadays. However, I really recommend the Pebbles, as you mentioned. Each member of the band is so talented. I also listen to a lot of old Japanese music like Happy End, Eiichi Otaki, Pico and other Showa-Kayo songs and Group Sounds (GS) recordings. I bascially like foreign music, so I like Japanese songs that are based on foreign music. 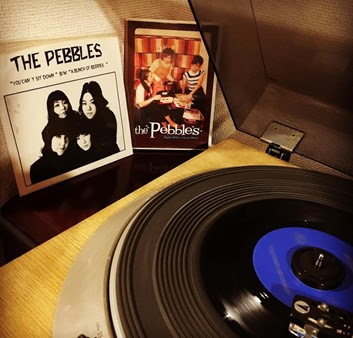 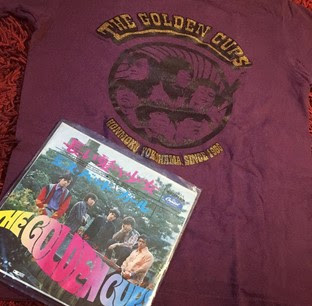 The Golden Cups are one of my best recommendation in Japanese GS (Group Sounds). Take a listen to their original “This Bad Girl." Its rough fuzz guitar sound is so cool! 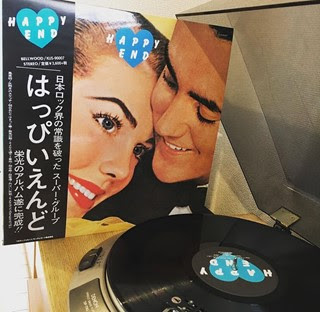 Here’s my other recommendation Happy End’s 1973 album and one of the most important bands in “City Pop,” the latest music trend in the world What have you been listening to lately? Margo Guryan, Judee Sill, Molly Tuttle, Susanna Hoffs etc. I post them as now-playing on my instagram account. 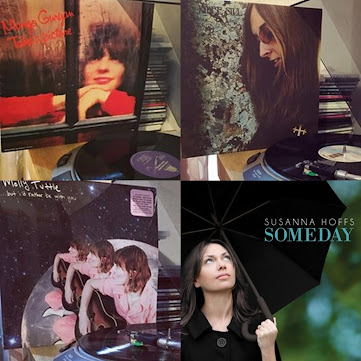 Favorite ‘60s Girl Groups?  The Ronettes, the Supremes, Shangri-Las, Martha and the Vandellas, the Paper Dolls, the Breakaways etc. 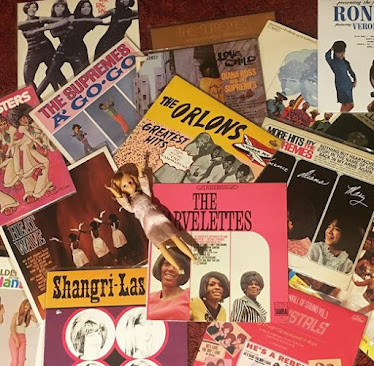 Favorite Girls with Guitars groups? The Runaways, Nicki and the Corvettes, the Pleasure Seekers and other lesser-known bands found on the “Girls In The Garage" compilations. 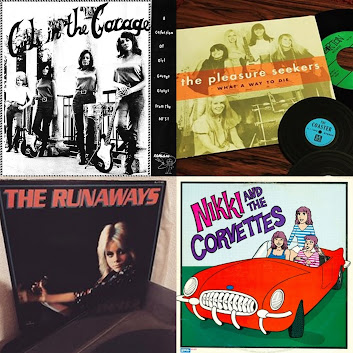 Yes, after I graduated from university, I studied Chinese there for one year.

I also took my guitar with me to Beijing. 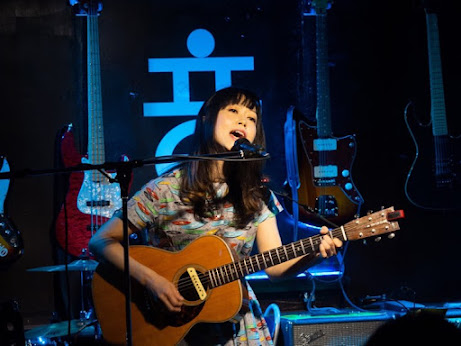 Labels: The Fabchicks, the Pebbles