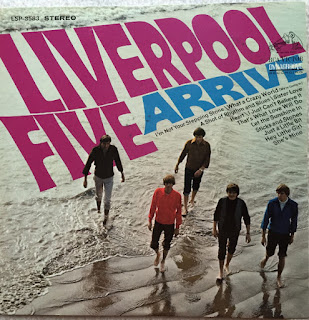 With a band name that made me confuse them with the Liverpool Echo, I never gave this outfit previous consideration until “Sister Love” recently caught my ears.  The song offered not only a delightful mélange of beat, folk and garage, but also a palpable sense of soul.  The inherent soulfulness of the song made sense when I discovered it was written by Curtis Mayfield.  Arrive (their American debut album) remarkably features “Sister Love” plus two more compositions from Curtis Mayfield.  (Interestingly, 2008’s Best of the Liverpool Five collection from Sundazed does not include any of the Mayfield material.) "That's What Love Will Do (To You)" is the second Mayfield song and presents them in a refined Searchers mode. "Hey Little Girl" is a swaying dance floor number that Mayfield first handed off to Major Lance between his big hits "The Monkey Time" and "Um, Um, Um, Um, Um, Um."  The Liverpool Five's version features some standout backing vocals-especially when their voices converge on the forefront to proclaim, "Let's Get Together." Action-packed between the Mayfield compositions are some stompers that rave-up and nose dive somewhere between the Count Five and the Yardbirds. The LP5 drape fuzz all over the slow burning " I Just Can’t Believe It"  written by Barry DeVorzon (of  “Nadia’s Theme," “Theme From S.W.A.T.” and Valiant Records fame) and convey a "she's gone" lament with determined resolve in reaction to the crushing blow. 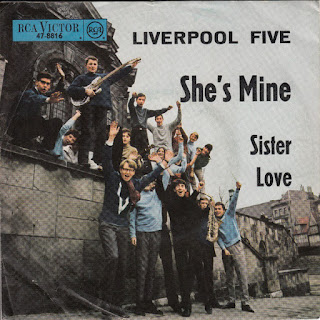 While the shopworn narrative is that the tough British Invasion bands reintroduced the blues back to America, what is often taken for granted (here in the U.S.) is the monumental influence of American soul music had on the development of British Beat music (along with skiffle, the Shadows. music hall and folk).  The band’s trajectory was just as adventurous as their song selection as they were mostly from London before honing their sound in Germany (like that band that was actually from Liverpool). They even performed at the 1964 Tokyo Olympics and played in the Philippines before sharing the Hollywood Bowl stage with the Beach Boys & the Byrds at the Beach Boys’ Summer Spectacular in 1965.  The group somehow ended up based in Spokane, WA where they reached the mountain top of the ultra-competitive Pacific Northwest scene. Thanks in part to Curtis Mayfield, it's now hard to overlook this British Invasion band and their well-traveled sound. 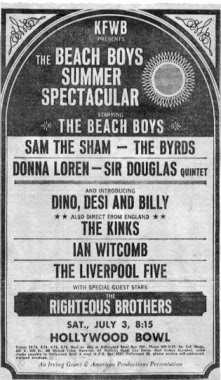 Rex Kona and his Mandarins-Wild Orchids 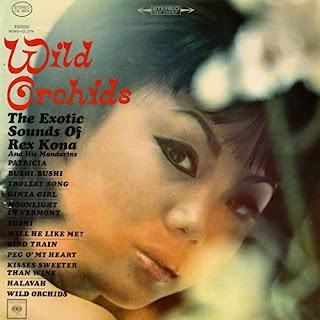 While existing in the world since 1964, I only recently had the good fortune to encounter this domestic oddity with its tilt towards the Far East.  Overall, it’s a now sound record layered with copious vibraphone, wind chimes and marimbas. Further explorations reveal the prominent cross-currents of Latin jazz and samba swirling about at the time of recording.  The album is atmospheric in that listeners can hear the separation of the instruments and feel that something different in the air. Wild Orchids starts off with a brisk sense of urgency as the Mandarins quicken the tempo of the old standard “Kisses Sweeter than Wine.” Besides the obvious influences of Martin Denny and Lex Baxter, there are also hues of Tak Shindo as heard in the Sino-Japanese motifs which run throughout the album and are especially pronounced in “Bushi, Bushi.” “The Trolley Song” seems to even anticipate the playfulness of Rolfe Kent’s soundtrack for Sideways with its accordion-led melody. “Bird Train” meets and exceeds its song title with its dashing bongos and a whole Tiki Room of bird whistles. The only ambient sound absent seems to be the rhythm of the falling rain. Don’t expect a profound or earthshaking experience with Wild Orchids, however these sounds float through the speakers like a refreshing Pacific Ocean breeze.
Posted by Ted at 8:46 PM No comments: 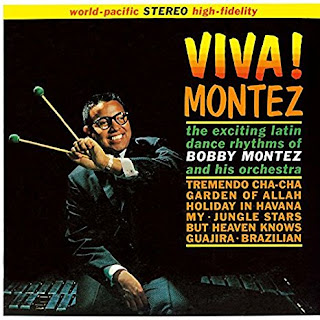 Bandleader and vibraphonist Bobby Montez hailed from Sonora, Arizona, but good luck finding it on a current map or on the actual horizon because it’s one of those copper mining towns like Ray that no longer exits.  Montez was able to quickly rise from his dusty desert beginnings to space age heights by creating a vast array of musical stardust by blending Latin jazz with elements of exotica.  Viva! Montez is one of two albums he recorded with World Pacific after previous releases on Jubilee (1958’s Jungle Fantastique) and GNP Crescendo (1959’s Lerner & Loewe in Latin). Viva! Montez abounds with his sophisticated, yet sweeping arrangements which slide open at times to reveal their percussive infrastructure.  One of his most evocative numbers is “Garden of Allah” which refers to the long-gone West Hollywood hotel and favorite haunt of F. Scott Fitzgerald. While Montez’s vibraphone and piano carry the waves of melody, the congas and timbales swirl and then crest before the chanting chorus. His playful instrumentals “My” and “Brazilian” sound way ahead of their 1961 time due to their freshness, vibrancy and understated elegance.  It was written that by day he worked as a landscape architect and by night he led his quintet at fledgling nightclubs from the M Club in East Los Angeles to The Crescendo in Hollywood during the late ‘50s and early ‘60s. The last printed mentions of Montez playing live were engagements at the Golden Sails Lounge in 1967 and a residency at the Executive Suite on the Pacific Coast Highway in Long Beach in 1970, according to listings in the Long Beach Independent. The paucity of biographical information across the interwebs, only heightens the mysterious allure of this versatile artist and his incredible musical journey from Sonora, AZ to this century’s belated acclaim as an integral figure overlapping the West Coast Latin jazz & exotica scenes.
Posted by Ted at 4:35 AM 1 comment:

I Am Another You-A Film by Nanfu Wang 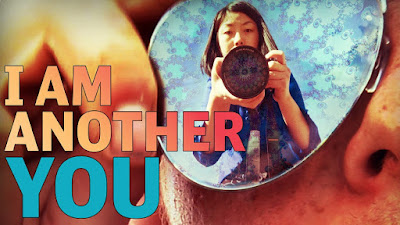 In the urban wilds of South Florida roams Dylan who both explores for the sake of exploring and works for the sake of hard labor. He is doing his “Into the Wild” thing, but in the opposite geographical direction of Alexander Supertramp aka Christopher McCandless, as Miami becomes his new sunny habitat to be deliberately homeless after a stint in San Diego. Nanfu Wang, a film maker from over-industrialized mainland China, sets us out to document street life in America where her path converges with drifting Dylan. While she initially senses freedom in that the sky is Dylan’s roof, she later sees the selflessness of Dylan’s trajectory.  He may appear free on the outside, but inside his mind is mired in a vat of drugs and ensnared by paranoia. He tellingly declares that he is "22 years old, but feels like 100." Accompanied by her camera, Nanfu decides to enter dumpster diving street life in order to better understand Dylan and the concept of “freedom” in America.  Right away, they end up getting roused by police for sleeping in a city park.  She eventually finds out he was originally from Utah and was Mormon for more than a minute.  As she digs into his past, she finds more layers and much more complexity, which eventually leads to filming Dylan on his home turf within the dynamic of his estranged family in Utah. Nanfu and Dylan’s working relationship immediately halts when things come to an impasse over a donated bag of bagels given to Dylan as goodwill by a "Philadelphia-themed" Miami bagel shop.  Watching their underlying Eastern & Western values clash over the donated bagels is particularly piercing.  Dylan argues that he does not want to schlep the extraneous weight and make unnecessary restroom stops, but Nanfu sees it as a shameful act of wasting food-especially premium-grade bagels given away as an act of kindness.  Dylan and Nanfu lead viewers to both the visible and elusive edges of homelessness and ultimately to the question, “Does one have to lose oneself in order to find oneself?" 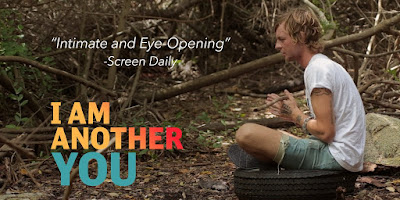 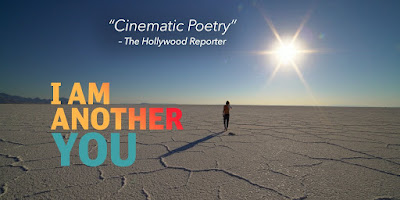