Waylon Jennings-Love of the Common People 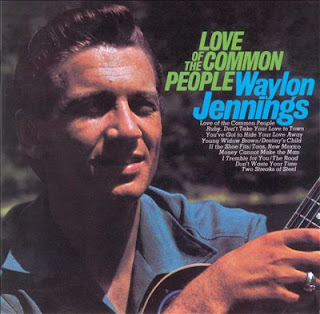 After overpowering a woodsy Beatles song (You've Got To Hide Your Love Away from their Help album),Waylon quickly follows up with the title song where it all comes together for him.  With Love of the Common People, his resonant baritone and larger than life persona perfectly match its ascending arrangement and overt theme of social justice --presaging Elvis Presley’s In the Ghetto by two long trying years in America.  This pivotal song reached #3 on the 1967 country charts and was said to have gone all the way to #1 in Navajo country.  On a popular culture level, Waylon would later go on receive more exposure and notoriety with his ‘70s “outlaw” work, his big screen appearance in the Sesame Street movie Follow that Bird and his "Theme from The Dukes of Hazzard (Good Ol' Boys)" which played in millions of living rooms each Friday night in the early ‘80s.  However, on this relatively unheralded album centered on its aforementioned title song, Waylon is able to lovingly stir individual listeners while also raising their consciousness to the plight of others.
Posted by Ted at 3:37 PM No comments: