The Riots-Love After (Sound Camera Records) 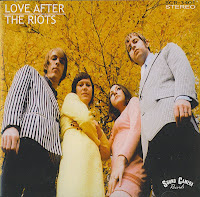 One: Aftermath
In this current age besieged by so-called garage bands that lean more in the ponderous era of pre-punk 1975 than seminal 1965, the Riots have broken out to properly realign the currently misplaced garage banner back to the spark of its mid-sixties heyday. They do this by offering a musical authenticity and soulful sincerity not provided by the current bastion of bands prancing over stagnant landfills of burnt-out boogie under the misleading guise of garage. In addition, the Riots radiate a vitality and verve that marks them as true rogues in these current times inundated by sauntering bands who are essentially missing the beat and ignoring the roll inherent in the most striking garage music.

Two: The Sounds of Yesterday & Today
In the Riots sound, the spirit and spunk of such unheralded Michigan forebears as the Unrelated Segments and the Underdogs looms large--along with the repercussions of the Animals, ? and the Mysterians, the Chocolate Watchband, the Yardbirds, the Small Faces and Barry & the Remains. On a contemporary trans-world level, the Riots share some of the same magnificent mentors and buzzing transformers as the Chesterfield Kings, the Greenhornes, the Embrooks and the Hentchmen.

Three: The Sound of Love After
While so many flavor-of-the-week “garage” records have fallen through the bleachers on their own weight after the initial promo push, the Riots have unleashed an album that pulls elusive immediacy together with lasting presence. Freddy Fortune’s distinctive production radiates their reckless ambition while losing none of the band’s musical dimensions. Fortune, working in Grandpa Munster-like fashion down in the all- analogue galore of Sound Camera Studios, achieves this by compounding their essential elements, energy and essences into a formula of unified stereo action. The resulting mid-fi mix is a sonic blast constituted of gashing guitars, rollercoasting keyboards, pow-wow drums and hold-the-fort-down bass--all acting & reacting within corner turning arrangements.

The opening song "Hold on Me" storms out of the speakers like Paul Revere & the Raiders signaling a Union Jack Freakbeat attack. Throwing off spunk, sparks and combo organ dips, the relentless "Stop Knocking" belts it outs between staircases and steaming sewers with command and an indirect nod over to the Shadows of Knight. In the next 2:50 sonic adventure, "Broken Man" climbs to 99th floor of the emotions before reaching a rickety bridge suspended by handclaps and crossed with derailed determination. Once across, the Broken Man screams out a declaration of dependence before continuing into the end-of-wick confusion and the rip of the firecracker drumming.

Next, stuttering guitars, torn out of Love’s "My Little Red Book," introduce and reinforce, "Cold Hearted Woman" before expanding out in all directions and dimensions on the soulful psychedelicized chorus. "Tell Me Tonight" is a musical funny car in which a saxophone props up the frame to expose a pivotal Wurlitzer organ solo before charging down the musical strip still marked by the Royal Pendletons. Swirling sitars, bongo beats and buoyant organ notes (echoing the lost ‘60s band Afterglow) surround "Tomorrow" and take this recording out to new realms before reaching the final destination of this dynamic and vivid debut. Overall, the percolating flourishes of a vintage Rheem Mark VII organ (yeah, the same company known for their hot water heaters) and the impassioned lead vocals topped off by captivating co-ed backing responses conspire to make this album and band stand out in the current congestion of the garage.

Four: Tomorrow
Far removed from the recurring patterns of bands essentially playing seventies arena rock under the protective and now trendy roof of garage, the Riots reclaim and reflect the inextricable link between the mid-sixties and most vital and vibrant garage music. This is only the beginning of more essential and enduring things to come from Sound Camera Records and their unceasing quest to provide, “The Sound of Yesterday, for Today's Tomorrow.”
Posted by Ted at 7:10 PM No comments: