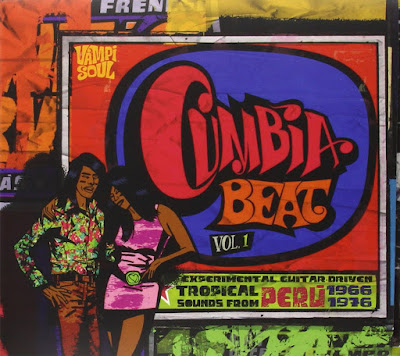 During the prolonged summer here in the Arizona low desert, I share the local tendency to yearn for cooler weather, yet once it finally arrives music emblematic of warmer climes (Afro-Latino, Caribbean-Tropical) quickly returns to the listening rotation.  Spurred by hearing the stunning “Guajira Sicodélica” by Los Destellos (included on this collection), the recent tilt away from the sun has brought about an extended exploration into Peruvian Cumbia Beat (aka chicha). The effervescent folk melodies interwoven through the constantly shifting syncopated rhythms leads to a sound that is at once dashing, dexterous and hypnotic. The vast majority of this music is instrumental and guitar-centric; prompting many in Northern Hemisphere to instantly note the prominent Southern Californian surf, Spaghetti Western and British beat influences. Equally important are the unbridled percussive patterns lent from Colombian cumbia and Afro-Cuban rhythms that make these sounds crack, whack and gallop along with the dashing folk melodies imbued with Peru’s Coastal, Amazonian and Andean influences. To top things off, these ground shaking groups incorporated the entire spectrum of emerging guitar effects of the innovative era. Some standouts like the merengue-tinged “Cabalgando Con Ella” by Los Mirlos and the coiling “Captura De Lobos” from Los Orientales De Paramonga employ the watery guitar effect like some sort of balmy Vinnie Bell, while the songs which try to approximate the overdone Santana sound are not as absorbing. Down the line, Los Átomos De Paramonga’s “El Trencito” is an example of the melodic ‘60s pop sensibility running through these songs that perform double-duty as floor-filling dance music. An unexpected and twangy cover of the Beatles’ “I Don’t Want to Spoil the Party” (simply translated as "Aquí en la Fiesta") by Los Ecos shows up near the end in full on dusty Bakersfield/Buckaroos regalia. Overall, these appealing and adventurous Peruvian sounds reach new sonic plateaus suspended somewhere between the lush rainforests, the steep-edges of the Andes and the vast Pacific Ocean.