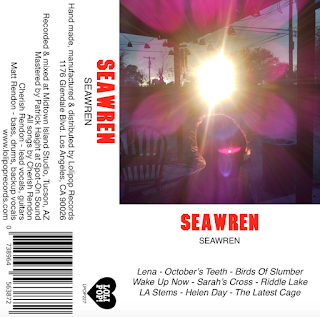 Musician, producer, arranger Matt Rendon has been setting things in major motion down in panoramic Tucson.  Not only is he the prime mover behind some of the best releases of this decade (Crummy Desert Sound by the Resonars and The Butterscotch Cathedral), he's also been directly involved, in both playing and production capacities, with stellar debut albums from The Freezing hands, Harsh Mistress and now Sea Wren.  In theory, Sea Wren has the great notion of what perhaps the Resonars would sound like tinted with female vocals. In actuality, Sea Wren is their own distinct entity along with combining all the wonderful elements you have come to expect with a release from Matt's Midtown Island Studio. The songs are mid-fidelity pop gems that are more fizzy than fuzzy (like say the Burnt Palms) and shamble and bounce over an infusion of post-punk/new wave angular energy.

"Lena," one of those perfect international girls names, starts with lyrics of questioning while the brisk and breathtaking music is a declaration of desert clarity over deliberate coastal murkiness.  It ends up in the same neighborhood, as "Definitely Crescent Ridge"-the lead-off track from the Resonars' 1998 debut.  "Lena" is also one of those songs that you will wake up with the chorus running through your head. "Birds of Slumber" winds up the Raspberries' "I Wanna Be With You" super-glued to a Guided by Voices-ish verse before fleeing the Ohio stickiness to explore now classic sunburst Resonars territory accompanied by percolating keys.  Along with dialing into the vibe of the the vastly unsung Sacramento band Baby Grand, "Wake Up Now" is overcoated with a "Lovelife" Lush or Primitives sparkle finish and propelled by rat-a-tat-tat drums. "Sarah's Cross" evokes the Zombies/Zumpano leaning up against Heavenly and Nosotrash with its pep, hooks galore, ringing guitars and bridge suspended by soaring harmonies.

Within the interchanging and intertwined guitars that clash and converge, "Riddle Lake" is an example or their pop-rock where the colossal and sprawling is contained within their overall concise and minimalist approach.  A Palomar/ Peach Kelli Pop-like chorus on "LA Stems" is supported by a Wendy & Bonnie layered arrangement where the Westward leading parallel and counterpart harmonies conjoin and blend to make for one of the highlights of this album. The song also reminded me of the seemingly long lost Japanese band kabochack.  Intended or not, "Helen Day," curves into the "Ventura Highway" with its reflected harmonies backlighting and glowing throughout the song that fills the space with possibilities. "The Latest Cage" is the song that immediately jumped out to me with its Lesley Gore-ish vocals gliding over Spector pop percussion and then proceeding in an unexpected direction with an ascent from River Deep to Mountain (Lemmon) High.

Sea Wren brings the past and present together to create their own signature sound as well as sharing the compelling timeless pop sensibilities of the Midtown Island Sound.  With several exciting projects (Harsh Mistress II, The Freezing Hands II, new Resonars) said to be the works, I can only imagine what Matt and his overlapping circles of musicians have in store for the future on Tucson's wide-open horizon.  Without question, they will continue reaching for new heights "Under the Blazing Stars."
Posted by Ted at 10:35 PM No comments: 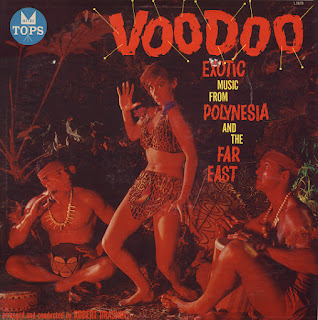 The late ‘50s/early ‘60s were the halcyon era of exotica recordings partly due to the ascendancy of high fidelity, the popularity of easy listening & jazz, requisite post-war Polynesian escapism along with the universal human search for the indigenous. While not one of the genre giants (Les Baxter, Martin Denny, Arthur Lyman, and Yma Sumac) the adventurous sounds and intricate musicianship found on Robert Drasnin’s Voodoo has allowed his original compositions to endure and connect to ensuing generations. In its original vinyl incarnation, this is one of the most sought-after exotica albums due to the original minuscule print run and distant realms evoked within its grooves.  “Orinoco," flows and floats like lava over the continually shifting plates of pan–global percussion-sweeping the sound to overlooks of the vast Pacific. Interweaving harp, glockenspiel and wind chimes, “Enchantment” sways like a flourishing palm tree somewhere between the still spreading seafloor and the jet stream.  “Tambuku,” featuring a young John Williams on piano, takes on Far East motifs with an understated atmospheric approach free floating over a panorama of perpetual percussion. Voodoo frequently explores the rarefied space where exotica overlaps with Latin Jazz. Accordingly, it's the perfect soundtrack for an excursion to the famous Kon-Tiki in Tucson or on the back porch between drug store tiki torches and visions of Easter Island.
Posted by Ted at 7:22 AM No comments: