While most recognized for his 1961’s #3 hit record “A Hundred Pounds of Clay,” Gene McDaniels had a long and extensive career as a singer, songwriter, performer and producer.  His 1975’s Natural Juices long player for Lou Adler’s Ode label arrived a year after Roberta Flack took his composition “Feel Like Makin’ Love” all the way to #1.  The song is now considered a perennial pop standard and has been covered by George Benson, Marlena Shaw, Susan Wong and over 400 others. This songwriting success furnished McDaniels the collateral in the industry to release an album entirely of his own compositions.  So what does a self-produced Gene McDaniels album from 1975 sound like? While a significant portion meets the presuppositions of a mid-career recording made in the gap between funk and the domination of disco, it largely exceeds expectations due to his reassuring voice and resolute presence. The album begins in sparkling fashion with his own indelible "Feel Like Makin' Love" that features a pronounced piano break by Bob James. Interestingly, his voice veers at moments into that delightful Sammy Davis Jr. croon.  Decorated with baroque touches, "Lady Fair" sounds like what you would expect of a mid-70s single with said title released in the late Aquarian age. He hits his stride with "Can't Get Enough of You" where his soothing vocals shimmer in a whirlpool of warm and lush tones.  On the whole, it would have been preferable to have his four-octave voice up in the mix and on the forefront like his early '60s hits or his two overlooked mid-sixties singles for Columbia, but his leanings towards an egalitarian ensemble approach and the industry standards of the times are certainly understandable. Meanwhile, he goes in balladeering direction on the dreamy "Waterfall" which evokes the shades and sensibilities of Scott Walker. This comparison is not so much a stretch as in 1966 the Walker Brothers covered "Another Tears Falls" that McDaniels previously performed in Richard Lester's first film "It's Trad, Dad!." The dusky "Perfect Dream" draws the curtains on this album and recalls Sinatra at his most understated and reserved. It's both a smooth landing for McDaniels and a return to transporting listeners to previously unexplored realms of soulful sounds. 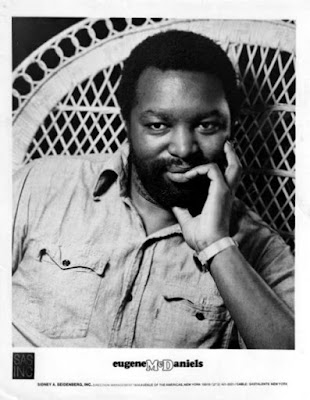