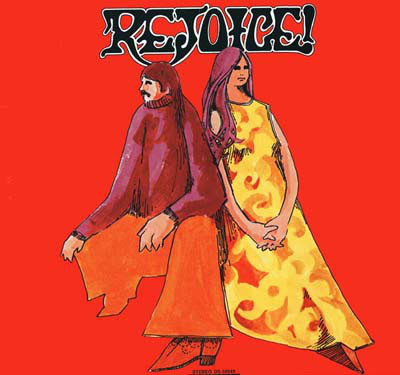 Perhaps the most distinguishing aspect of this 1968 album beyond its bold period charm quasi-religious front cover is that this co-ed folk duo is backed and bolstered by three heavy hitters of the Wrecking Crew including legendary drummer Hal Blaine who passed away at age 90 in March 2019.  While none of the subsequent tracks are as immediately transporting as the banjo-flecked lead-off track “Sausalito Sunrise,” the album is an intriguing late entry in the ampersand co-ed folk duo movement that spanned across the entire decade of the ‘60s.  The proficient musical bed tilled by the Wrecking Crew musicians on lilting, albeit fleeting songs "Spring Flew in Today" and "Even Through" makes it sounds like that Tom & Nancy Brown are layering their flowering vocals over a sweeping '60s motion picture soundtrack.  In other spots, you can hear the underlying tension of a ramshackle Bay Area couple bereft of their familiar Marin Couny-based accompanying band and not quite coalescing with the professional approach of the top flight L.A. studio musicians (Joe Osborn on bass and Larry Knechtel on piano & organ, besides the aforementioned Blaine). "Establishment Blues" might have brought down the communal house in '68 with its barbed jabs and then trenchant commentary, but the resistance sounds futile today.  In contrast, it’s the more gleaming commercial AM transistor radio material which remains in focus to this day. "Golden Gate Park” is a bubbly psychedelic lite pop chronicle of being momentarily footloose and fancy-free on a turn down day.  It was appropriately chosen as the first single as it's an audio equivalent of Peter Max’s "UnCola" advertising art for 7Up. While Rejoice! lacked the crystalline harmonic interplay of Blackburn & Snow or the turn up the AM radio factor of Friend & Lover, their opportunity to combine forces and record with members of the Wrecking Crew is beyond compare. 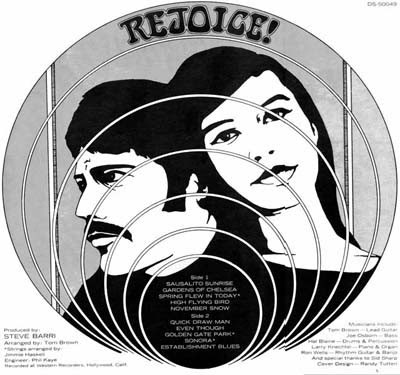