Think of the Good Times: The Tucson ‘60s Sound 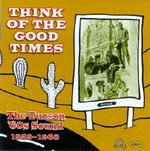 The wait is over! After years of Bacchus Archives promising to offer this collection in the CD format, the label has really delivered the piñata’s prizes by extending the range of the original LP to make this a sweeping retrospective of the Tucson ’60 scene and sound. Unlike most ‘60s, comps which usually focus in on particular styles/years, this one boldly round-ups an entire decade of music from the old pueblo of Tucson. To introduce the wide-spectrum of sound, influenced by an untranslatable regional culture along with the best elements happening in Los Angeles and London during that decade, the disc opens with a KTKT “teen dance” radio promo (which also exemplifies the loving detail the label invested into this amended re-issue). Musically, the record starts with some sharper than a cactus instrumentals branded with twang and cavernous echo reflecting Eddy/Hazlewood’s pioneering production up in Phoenix. The standout instrumental is the Travelers’ “Spanish Moon” which conjures up finding solace between the Shadows under the glow of TraveLodge’s “Sleepwalk’n” Bear sign (on Speedway Blvd.) after the harsh glare of the sun has finally set under a purple streaked Southwestern sky. “Baby Do” makes me wonder if the Woggles were once known as the Intruders before taking a quantum leap from Arizona 1963 to Atlanta circa now. Conversely, “Then I Know” finds the Intruders in confusion with love and in concord with the Beau Brummels and the Zombies (or Phoenix’s Phil and the Frantics). I wondered how the driving “Dark Side” by the Reason Why drifted from the discerning consideration of the “Fuzz, Flaykes and Shakes” series compiler Tony Sanchez, until reading the lavish liner which explains this Cooper State colossus was previously never released. Other highlights are the bougainvillea entangled psych-pop of “309” by Butterscotch, the moving Davies directness of the Quinstrels’ “I’ve Got a Girl” and the pronounced and propulsive drumming found in the Sot Weed Factor (who really resemble the Missing Links from the other down under). Coincidently, Tucson High’s Missing Links finish the disc by turning in a murky cover of the Zombies’ “You Make Me Feel” loaded with gray locker lament. Commendably, Bacchus Archives have reopened the wrought iron gates to a wide-open musical frontier town during an incredibly evoking era. It’s time to hear and “Think of the Good Times” once again. (Dionysus Records)
Posted by Ted at 9:32 PM