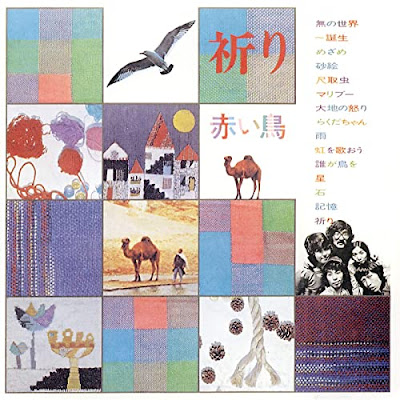 I first encountered the Red Birds when I came across their colorful picture sleeve 45 of “Kami Fusen” (Paper Balloon) in their native land at a flea market surrounding the Tō-ji temple in Kyoto. Although they appear on the vibrant cover of this 1973 release like the ultimate Japanese sunshine pop band, the song starts as a slow burner before turning an unforeseen corner of chugging guitar chords before their co-ed harmonies interlock and lift the song to the stratosphere. Akai Tori (the Red Birds) were pretty prolific in their short span that ran from 1969 to 1974. Of their 10 albums released in five years, Inori (Prayer) surfaced to be the most intriguing in spots, yet bewildering as a whole. In general, it’s not dependent on MOR covers of boring Western hits (e.g.”You’ve Got a Friend,” “Bridge Over Troubled Water”) or the more cloy trappings of early ‘70s soft rock that time stamp their other albums. The album starts especially strong with the versatile group quickly establishing a countervailing direction from their previous efforts. “The World of Nothingness-Birth” could be best described as an approximation of taiko in space before segueing into the curvilinear lushness of  “Awakening.” which sounds like Cold and Bouncy-era High Llamas warmed by “Sun Goddess” from Ramsey Lewis. Elsewhere, “Malibu” casts the vibe of prime Sergio Mendes & Brasil '66. “Niji Otaou” ("Sing a Rainbow") features Junko Yamamoto's pleasant female vocals which are reminiscent of those later heard on the Pen Friend Club albums. Despite the enchantment found in some of these individual songs, the album frequently goes off the tracks with missteps like the old-timey silliness of “Rakuda-chan.” In other moments, its momentum is thwarted by plodding and scorched out filler material like “Hoshi” and ”Ishi." “Kioku.” ("Memory") reprises the space-age waterbed sound of “Awakening” as a male voice recites a monologue that contains some sort of The World Without Us contemplative message by way of Rod McKuen. The lofty a cappella choral title track of “Inori” ("Prayer") fittingly concludes this stylistically incongruent album. This Handel composition is once again as unanticipated as all the preceding songs that are only held together by some loose conceptional ecological theme. 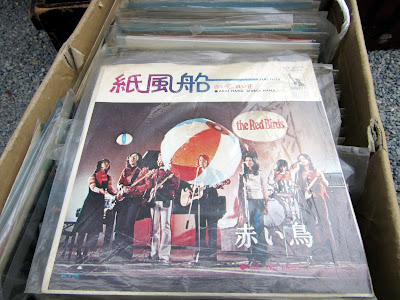