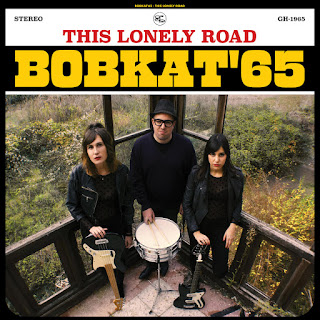 You gotta love debut releases like this 2017 one from Get Hip, one of my long-time favorite record labels. This trio, from Asturias in Northern Spain, is deeply immersed in the mid-sixties American garage rock girl group sound. On the surface, the sights and sounds are so immediately striking that they could crossover to the Burger, Lolipop, and/or Hardly Arts sets-not adverse to twang and reverb. Underneath, the roots are so buried that this record will have ardent acolytes reaching for their TeenBeat Mayhem! book, discovering a mostly hidden Hamtramck poet and reconsidering forgotten garage compilations. In other words, they are a contemporary combo playing genuine garage rarities and doing it well.  In the process, they forge their own sound that allows them to set themselves apart from others who have traveled along this midnight road.  To mention specifics, they sound in the vicinity like the recent past (Denise James, cub, Dreamdate) peeled away to reveal the golden past (Luv'd Ones, the Chymes, the Continental Co-ets).


The album sets forth with some "For Your Love" Yardbird-ian chords and continues crackling along until the fuzz comes storming in.  The exuberant "Try" is a cover of a '66 curio from the Cobras of Danville, IL.  This is Ernie Douglas rock 'n' roll at its epicenter and Bobkat'65 push their own brimming harmonies to the fore. This song in particular conveys their ability to use these records as starting points towards shaping their own sounds through the mists of time. "Gone Gone Gone" was devised by Hamtramck Renaissance poet Richard Wohlfeil and comes across like the kind of mean-street-lore that would snake charm the Detroit Cobras. Two originals ("Hey You Boy (Stay Away)," "I Don't Care") appear around the mid-point mark and have the raucous sound of the Pleasure Seekers denting into the Smears in the Garage. "Loneliness is Mine" was sourced from the Esquires of Irving, TX and the trio emphasizes the twang along with crashing reverb tanks to convey a sense of Dallas town dramatics.  Ana & Paula's voices, in unison, build to take the song into brooding Shangri-Las Land. "To Be Like You" was originally done by the Missing Lynx a folk-rock outfit from Great Falls, Montana.  The down, down, up, up, down is not only the standard folk-rock strum pattern, but also signifies the overall moodiness as well.  Their aligned voices and mid-tempo pacing express the sense of equilibrium, harmony, and hard-fought wisdom found along This Lonesome Road.