Rufus Harley-Re-Creation of the Gods 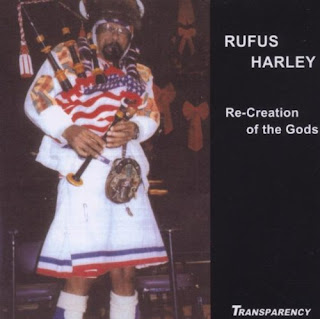 His jazzy spaced-out bagpipes rendition of the groundbreaking "Eight Miles High" by the Byrds was my first encounter with the music of Rufus Harley.  Intrigued by further releases like his spiraling cover of "Windy," (which was reported to have brought audiences to their feet) I recently plunged into the 2006 Rhino collection Courage which offers his complete works (comprised of four albums) for Atlantic Records. This set is packed with that pervasive snaking, stinging and buzzing sound created by the inherent sustain of the bagpipes. Harley is able to express the melody via the chanter while delivering true distinction through the three drones. During his most active period of 1965-1970, he was reviled by old guard critics, embraced by listeners and respected and championed by fellow musicians like Coltrane, Herbie Mann and Sonny Rollins. This adventurous, idiosyncratic and frequently incandescent music also features strong elements of Latin jazz percussion (think Willie Bobo) which add additional dynamics and propel these songs forward. As an aside, these '60s recordings have taken me on a round trip from my first cassette The Crossing by Big Country in 1983 to now. To think all this would begin with Big Country's guitar emulations of the bagpipe!

This brings us to 1972's Re-Creation of the Gods, which many hail as his crowning achievement with its nods to the triangular power of community, church and cosmic consciousness as expressed by his quartet. While embraced by the crate diggers for incorporating funk, hard bop and ground level storefront production, initial listens left me ambivalent and unmoved. The stacked strands of bagpipes, B-3 organ, bass, drums and desperate baby cries act as overlapping obstacles in that they cancel out much of the surging momentum or sense of melodic wholeness found on his previous works. It took some repeated listens to sense and begin to appreciate the looseness and density that some listeners will instantly embrace. Still, I gravitate towards his previous Atlantic releases and would first reach for his 1970 album King/Queens (presented in its remastered entirety on Courage) and includes the aforementioned soaring "Eight Miles High" and "Windy." On this final album for Atlantic, Harley taps into upper echelon Pacific Coast pop while offering promise land possibilities. 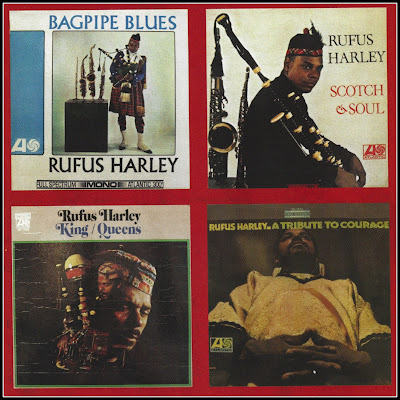