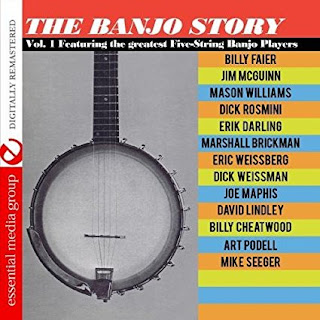 While this has been reissued endlessly, repackaged under several different titles, cover variations, track configurations, this is where it all began in 1963. This Tabula rasa is comprised of some of the major five-stringers of the folk revival-era including two who would subsequently go on make huge waves on popular culture, Roger McGuinn with the Byrds and Mason Williams with “Classical Gas.” While I previously unfamiliar with some of individual names (Dick Weissmann and Art Podell), I knew of the popular folk groups they were involved with (respectively the Journeymen and the New Christy Minstrels).  I have since learned they are considered consummate players and are still active to this day.  With remarkable finesse, Dick Weissmann celebrates the Colorado Rocky Mountains on his textured “Trail Ridge Road.”  Meanwhile with “Ragaputa," Art Podell’s takes the standard ringing banjo sound on a journey of exploration when he enmeshes it with the droning latticework of raga--all in one jet age minute. Mason Williams’s “Banjo Hello” is suffused with classical flourishes that would later become his trademark sound. The ol' stirring Irish traditional “Rakes of Mallow” is prominently echoed in Eric Darling’s “Banjo Tune.” Dick Rosmini’s “Fast and Loose” is a highly-evolved breakdown that is so speedy that it blurs into drones at moments.  Lastly, Jim (Roger) McGuinn’s rustic “Ramblin’ On” might be the roots of the Byrds, but it actually sounds like Charlie Chin’s banjo work with Buffalo Springfield. The Banjo Story-Vol. I has been influential for over a half century as it encapsulates 12 distinctive approaches to the banjo, while expressing the resounding & ramblin' spirit of this transitional time.
Posted by Ted at 2:05 PM