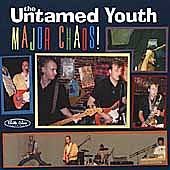 The Untamed Youth were the essential link between the mid-‘80s “Summer of Fuzz” 2nd wave garage barrage and the current garage high tide. While many mid-‘80s garage revival bands fell into the pattern of their forebears and bottomed out with a heavier sludgy sound by decade’s end, the Untamed Youth slogged it out on the highways and low-profile stages by bringing back the lost canons and firing its own multi-directional cannon--aimed anywhere between the feral ‘50s through the monumental mid-sixties garage battle grounds. They left a lasting impact which spans from the gritty lo-fi budget rock like the Mummies, over surf like the Phantom Surfers to the harmonic-pop side stacked by Fortune & Maltese. This compilation successfully corrals their rarities, singles and their bigger than a hearse sense of fun (as heard on the closing interview track). With Deke Dickerson’s stellar “Golden Stated Missour-ahh” voice and ace guitar playing on the forefront, the Bobby Fuller Four-ish “Don Stole My Girl” and the haunting “Surfin Man” confirm why this band will always be considered standouts in a now crowded and more diverse garage. They were also renowned for bringing back the non-obvious, yet not too arcane vintage covers with their “Blue Ribbon” renditions of Every Mother’s Son’s “Come on Down to My Boat,” the Camaro promotional song “SS 396” by Paul Revere and the Raiders and the Remains’ remarkable regional hit “Don’t Look Back.” Plied from a Gearhead Magazine insert, “My General Lee” is like a musical funny car that revs up, lifts up a lyric about Enos and releases its parachute complete with its trademark musical horn which sends me right back to Friday Night 1980. My only complaint is the lack of documentation regarding these recordings, but maybe that’s a mark of this band--which knows when it comes to the “Midnight Hour,” “Little Latin Lupe Lu” was never made or meant to be analyzed. (Double Crown)
Posted by Ted at 9:25 PM