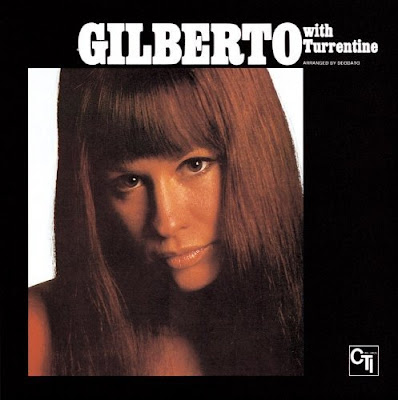 For years I have enjoyed The Astrud Gilberto Album ever since finding it for a buck in dusty Quartzsite, AZ. Last fall, I gave Stanley Turrentine’s laudable Salt Sea a new home after coming across it at a neighborhood garage sale in a moving box of ‘70s common stock.  I recently learned that their musical paths converged and they collaborated together on this 1971 album that was later reissued on compact disc in 1988 and 2003.  This 2003 remastered version from Sony Legacy is augmented with three bonus tracks. The lush, sweeping and textured production makes Creed Taylor’s presence immediately felt and heard, while Eumir Deodato’s adept, curvilinear and elastic arrangements gives the recording an ahead of its time feel.  Not only does the album come across as a precursor to the schematics of Stereolab and the High Llamas, but vibrant songs like “Traveling Light” and “Just Like You” sound like they could have even sprung forward onto a Stereolab album from 1996 or a Laetitia Sadier album from 2012.

Pinball Bumper Basslines
Overall, the album is not a strict showcase of Gilberto and Turrentine, but a diversified collection held together by a top-flight combination of American and Brazilian musicians. They present a panoramic sound by overlapping jazz and samba and successfully stretching their possibilities. Furthermore, their first-rate musicianship provides a solid foundation to counterbalance Astrud’s airy vocals. Her delicate voice slides over the pinball bumper basslines of Ron Carter and glides over Eumir Deodato’s Fender Rhodes piano. (BTW-Eumir Deodato is currently Justin Bieber’s grandfather-in-law.) On the opening and closing songs, both composed by Bacharach-David, Astrud’s soothing voice breezes over the warm guitar tones of Gene Bertoncini (Notre Dame class of ‘59). On adventurous songs like “Ponteio,” Turrentine’s tenor saxophone arrives on the forefront and then recedes to accompany Astrud’s vocals delivered in her rhythmic Portuguese.  Turrentine is later given the limelight on the instrumental “Vera Cruz" and the original "Mr. T" releases a sound imbued with poise and dexterity.

Poly High
The bonus track “Polytechnical High” sounds like one of those mechanical songs that the warped Brian Wilson wrote in the ‘70s in exchange for a brown bag of unhealthy substances.  Upon further exploration, the quirky song was first released by Harpers Bizarre in 1970 with writing credits going to Nilsson. Gilberto with Turrentine has the crossover appeal and variety to where far-flung listeners of easy listening, bossa nova/samba, Latin jazz, sunshine/soft pop, Shibuya-kei, soundtracks or jet set pop all could easily find something to suit their individual musical needs, while also being a captivating listen in its entirety.
Posted by Ted at 5:20 PM No comments: 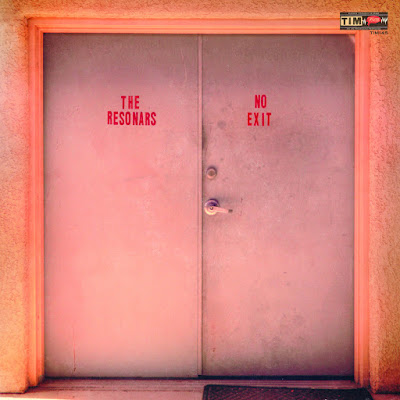 Things keep coming and going, but the Resonars remain a constant pop force within Tucson's somewhat submerged and unvarnished music scene. The last five years have seen some of my favorite bands (Freezing Hands, Sea Wren, Harsh Mistress) of this decade emerge from Midtown Island with the Resonars at the epicenter and Matt Rendon as the prime mover.  While these bands have overlapping members, they are not side projects, joke bands or offshoots, but full-fledged groups that all share a love of the melodic guitar-driven pop of the '60s and select moments of the '70s & '80s (that mostly reflect the '60s).  However they don't stop there, as they push forward their original sounds while further differentiating it by using the mid-fi recording equipment and production techniques inspired by the '60s masters (e.g., Martin, Wilson (both Brian & Tom), Talmy, Hassinger, Usher). When I first encountered the mundane front cover standing in stark contrast to the color explosions of the previous albums, I entered No Exit with some trepidation that this might be a wrong turn towards dispiriting dishwater indie-rock. My preconceptions were instantly replaced with the instant reaction that the album hits all expected markers and much more. In other words, the front cover is not truly indicative of the catchy and vibrant sounds found within its doors. For instance, the enthralling "Gone is the Road" scampers along paths first cut in those Nerves demos (namely "Too/Many Roads to Follow") that were later fully resurrected on some of the more recent Paul Collins solo albums.

While it might be hard to fathom, "Who's Going Believe You Now" successfully nicks the guitar riff off Ted Nugent's "Stranglehold." The rustic "Days Fade Away" manages to reflect the mutual admiration society of the Beatles' "I've Just Seen a Face and "Have You Seen Her Face" by the Byrds for a true baroque hoedown. "Before You're Gone" closes out side A and evinces a strong affinity for '70s power pop stalwarts (Flamin' Groovies, the Poppees, the Rubinoos and the Raspberries) with the sweet harmonies and guitars sharpened to the peak of perfection.  This solid pop is made possible by a well-honed sense of songcraft modeled on and inspired by the brilliance of the mid-sixties (when commercial success briefly coincided with artistic aspirations). This also serves as an example how the sounds of the Resonars have withstood the test of time by not being made in a pure pop snapcase, but created amidst the competing priorities, entanglements and the friction of workaday life.

Side B takes off like a rip-cord funny car with "Tucson Drag/All These Hats." This doubleheader features a Turtles-like "Buzzsaw" slicing through it before barreling down Speedway in search of an elusive Frozen Sun 45 or a stockpile of Midnight Cowboy soundtracks. The album goes from strength to strength with "Dull Today" and "Fell Into a World" as they are both finely crafted and flawlessly executed in classic Resonars mode. There is a subtle, but effective ringing buzz underlying "Dull Today," that provides welcomed contrast in the signal to noise ratio, while one almost expects to hear Peter Noone's bouncy vocals to appear after the guitar intro of "Fell Into a World." For a challenge, try discerning the source material for the pre-chorus of "Gotta Get Out" amidst the obvious nods to Big Star and the climbing and crescendoing Beach Boys vocal harmonies. This elusive pre-chorus seems to be an intriguing graft of the Clash's "Train in Vain" and "Cruel to Be Kind" by Nick Lowe, but still avoids being traced down. At the end of the day, it casts a radiant glow with its sundown harmonies.  If "Gotta Get Out" has a little different feel beyond the atypical arrangement, there is an additional reason as the lead vocals are handled here by Travis Spillers of the aforementioned Freezing Hands.

"Attention Here" skips along to deliver a barbed précis on the pitfalls of the more temporal trends in both the underground and mainstream of the last three decades, while also serving as an allegory to life itself.  No Exit not only contains their expected elevating harmonies and uncanny hooks, but also present the group at their most melodic, proficient and varied. Moreover, the compelling album captures the Resonars at a musical summit, reached by tapping into an extra sense of urgency and placing excitement into the Arizona air. 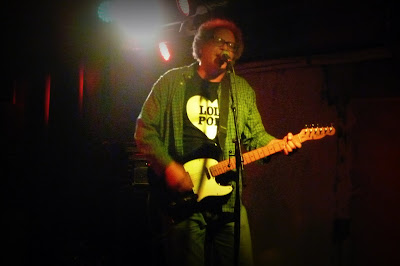