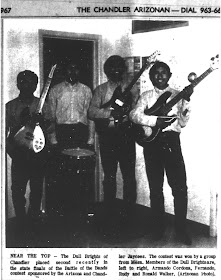 Garage Band, AZ, U.S.A.
While they shared many of the same experiences, common denominators and influences of countless garage bands across the United States, there is a major departure here from the standard narrative. As with so many other mid-sixties combos of the time, an affinity for the Beatles and the Rolling Stones was the main catalyst in spurring them to pick up instruments and making a go at it. They also had the proverbial close encounter where they were one break away from having their name distorted and submerged somewhere on a psychedelic San Francisco ballroom poster. While it was certainly a distinguishing characteristic to have three related brothers in a band, it was still not anomalous as the Beach Boys, the Bobby Fuller Four, CCR, the Everly Brothers, the Chambers Brothers and the Isley Brothers spring immediately to mind as examples of national acts of the era featuring true brothers. 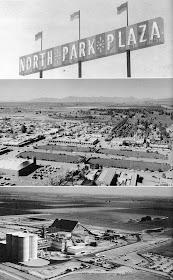 This is where their story veers from the usual garage band experience as these brothers adeptly straddled and balanced different worlds in a time of turmoil and transition on local, national and global levels. They were from Sacaton, the capital of the Gila River Indian Community and birthplace of Ira Hayes which runs along the south border of the Sun Lakes/Chandler city limits. At that time, Chandler was a Future Farmers of America town patched together between cotton fields and cattle barns. The band was comprised of Ronald Walker on bass (Fender Precision/class of '70), Rudy Walker on rhythm guitar (Fender Stratocaster/class of '69) and oldest brother Fernando Walker on drums (class of '68).  Armando Cordova rounded out the configuration with his lead guitar and vocals. In addition to their involvement in music, the Walker brothers were all standout athletes for Chandler High.  While it wasn’t uncommon for the young in the mid-sixties to overlap both music and sports, the brothers played football and baseball at such high levels that the school records they set stood until this century.  In fact, Fernando was the starting quarterback for the Chandler High Wolves and went on to play in the 1968 Arizona State High School North-South All-Star game that took place up in Flagstaff. His brothers Ronald (wide receiver/later quarterback himself) and Rudy (split end) were the recipient of many of Fernando's passes “I had it easy, all I had to do is drop back and fling the ball, while my brothers had to run around and catch it.” recalls Fernando. “Music and sports kept us out of trouble. We would play a football game and then have to be back to play the dance in the gym following the game.” Any attempt to achieve greatness involves sacrifice and this was the certainly involved in the Walker family “Our dad worked 10-12 hour days/ 7 days a week and we had to wait hours after practice ended for him to pick us up in his truck from the Emmick's Drive Inn across from Chandler High,” adds Fernando.

Desert Proving Grounds & Doors of Perception
From the start, the brothers were supported by their family. “Our parents always found time for us and actually managed the band.” says Fernando. In the charged atmosphere of Beatlemania and the Sunset Strip bands just starting to cross state lines, the brothers became inspired to teach themselves to play their instruments. "One time we were in a club in the Scottsdale area, and we look up to hear a man announcing that the Doors would be taking the stage. We thought, 'What kind of name is that?', recounts Rudy. "They proceeded to play "Light My Fire" just before going back to California to record it."  The brothers' intrepid efforts were bolstered by the addition of  Armando Cordova who had the ear to dissect the sounds which surrounded them. They were first known as the We Four, before settling on the apt band name of the Dull Brights for this area where the abundance of the sunlight frequently diminishes contrast and dimensions in a summer that stretches into November. For years, it seems like Chandler's music has been perennially overshadowed by the the sounds and stories of the Scottsdale, Tempe and Phoenix groups--when the legacy and lore of the local big beat sound is documented and discussed. Nevertheless, it was in Tempe, that the Dull Brights had their moment in the sun. "We had a gig at an Arizona State University fraternity house and had to go upstairs in their motel-like building," recalls Fernando. "There was already a band set up with extensive equipment, but they were simply playing from music stands while the crowd just stood around listlessly and listened. We set up our minimalist gear in a corner and had everyone dancing within seconds." Their R&B/soul orientation aided the cause while their boundless energy, led the charge. Correspondingly, their set list included numbers from Otis Redding, Wilson Pickett and the Rolling Stones' "Under My Thumb."
1967 Battle of the Bands-Arizona State Finals
In June of 1967, with instruments furnished from Chandler Music Center, they were runner-ups in the state-wide Battle of the Bands which transpired at Chandler High School. The local winning band from Mesa supposedly went on to compete at the National Finals of the Jaycees Battle Of The Bands competition held in Braintree, Mass. in August 1967. A 2 LP set of live recordings was issued at the time to commemorate the national event and now commands high prices in collectors circles. Besides playing dances, parties and other gatherings, they had to be versatile enough to pull off the country numbers in order to play the numerous country bars which once dotted the local area. They also played a Mexican set (that was popular on the reservation) with Armando handling the Spanish lyrics. As 1967 transformed into 1968, the band incorporated the heavier rock sounds that were starting to become predominant. Fernando, who would usually harmonize with Armando, belted out the lead vocals on their version of the Doors' "Love Me Two Times." To reflect the rapidly shifting cultural landscape, the band's name changed to Inner Blues Feeling. Also around this stretch, they opened for the Spiders/Nazz up in Phoenix who would go on to shock the world as Alice Cooper. In 1968, they were hired to play a dance at a high school in Carson City, NV. They got up there a few days early and they were able to secure a gig at the Golden Nugget Casino. "There was a scout for the Fillmore West and he made an offer to our father, explains Fernando, "but it was not in cards as we had to get back to school and our lives in Chandler." 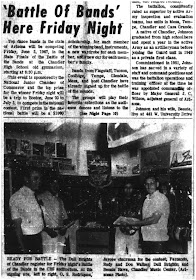 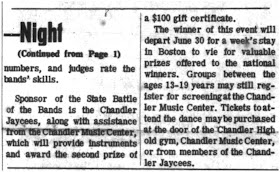 From the sun-cracked parking lots of Chandler to almost ascending the stage at the Fillmore West, the Dull Brights had the quintessential mid-sixties band trajectory and so much more. During this era of upheaval, they had a role in connecting the city and reservation through the common ground of their athletic and musical efforts.  On the reservation, brothers Marlin and Randy Johnson used to be around during their band practices. They went on to form their own band which is now the Gila River Coyotes. "We actually lived in a mudhouse back then,” recalls Fernando. “Kids from the city actually preferred to hang out on the reservation.”   Later on, the Walker family would have a street named after them, near where the mudhouse once stood. Today, the cycles continue, as Fernando looks after his parents, participates in master Native rodeos across the Southwest and is involved with the Chandler Special Olympics. Despite their illuminating musical trailblazing in Chandler and beyond, "The biggest honor of all is still being recognized by our tribal elders," summarizes Fernando.

Acknowledgements: Fernando Walker for his recollections, Rudy Walker for calling in when visiting from Oklahoma, Nate Meyers, Curator of Collections for the Chandler Museum, for the yearbook scans, Dan Nowicki for background on the 1967 Doors in Arizona, Billy Allen for sharing his Gila River Indian Community history and knowledge.